A Book and a Chat with Mary Monaghan 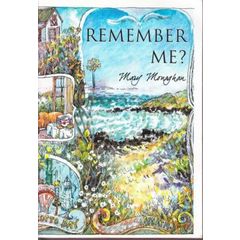 My guest on today’s “A Book and a Chat” called into the show from Cape Town, South Africa, though her life and indeed much of her writing relates to Ireland. Mary Monaghan was actually born in England of Irish parents; her family was much traveled, something that has seen Mary continue along with her love of languages.

In 1993 Mary was living in what South Africa in what she thought was a happy marriage her husband announced he was going for a backpacking trip to Australia for three months. That was the last she saw of him, well not exactly the last, but the last for 14 years.

This led too much bitterness, heartbreak and tears as Mary tried to get her life into some form of order. Her book “Remember Me?” originally for written for close family and friends became an almost overnight success and is now sheared with many, and is even optioned for a screen play.

When your husband vanishes without a trace, there’s no telling what you might do. Mary wrote a book. Remember Me? This book became a self-publishing success story, selling widely in both Ireland and South Africa.

She had wanted to share my story of how she had managed to survive and rebuild my life. Her marriage had been a happy one, envied by our friends.  As with any marriage it had its ups and downs but on the whole life was good.  Until one day her husband John announced he was leaving for a three month backpacking trip to Australia.

He left in 1993 never to return. Mary undertook a desperate struggle to locate the man she loved, finding out along the way of his involvement with at least two other women before he walked out on their marriage. She asked Interpol and private investigators to help me locate him with no success, eventually finding him herself and speaking to him on the phone six years after he had walked out on their marriage.

This however was not the end of the story as while visiting Ireland on a book tour she caught site of the man who has left her those many years before. FOURTEEN years, hours of crying and one book after her husband walked out on her, Mary Monaghan never expected to see him again. Yet there he was also visiting his family in Ireland.

What happened next can be found in Mary’s second book “Who Do You Belong To?”

A Mary herself says about this second book

The launch of Remember Me?  set in motion a whole new chapter of my life.  Even though it has taken many years I have finally let this man go and Who Do You Belong To? continues the story of my journey .  I had put John out of my mind, he no longer had a place in my life, but on a brief visit to Ireland to launch my book in 2007 I had a sudden, shocking encounter with him, fourteen years after his disappearance. Now I had the chance to get answers to all the questions that had tormented me for all those years when I was desperately trying to make sense of what had happened.  I was now face to face with the man who had caused me such heartache.

The writing of my first book changed my life irreversibly, setting in motion a new journey of triumphant discovery. Who Do You Belong To? takes you along with me as I travel the world, crafting an exuberantly independent life radiant with curiosity, promise, and fulfillment.

Mary has also written several self help books and along with her sister published her mother’s journal in the beautiful memoir “Green Are the Hills Far Away”.

About “Green Are the Hills Far Away"

Kathleen O’Toole and Paddy O’Connell, both from Ballinrobe, Co. Mayo, married in 1947. Kathleen’s childhood as “the red one on the hill” had earned her countless beatings from her teacher-nuns and her widowed mother; but her spirit survived undaunted. With Paddy, Kathleen found genuine happiness—and against the medical odds, gave birth to Kathryn and Mary.
A few months before her death in 1988, Kathleen wrote a short memoir. It painted a vivid picture of Ballinrobe in the 1920s; the Irish experience in England during WWII; and life as an RAF wife, including two postings to Cyprus. The memoir, which she called Green Are the Hills Far Away, took the form of a letter to her daughters. This book is an unabashed account of a bold, spirited life lived to the full.

So listen now and share an interesting, and entertaining show as I chat with my special guest today on A Book and a Chat with Mary Monaghan

You can find out more about my guest at:
"Mary Monaghan - Remember Me?"

Email ThisBlogThis!Share to TwitterShare to FacebookShare to Pinterest
Labels: A Book and a Chat, divorce, Green Are the Hills Far Away, Life Coach, Mary Monaghan, Remember Me, tears, Who Do You Belong To

There are, of course, different resources for learning programming like video lectures and interactive tutorials that will guide you in the right direction. So, if you've just started coding, or are planning on teaching someone how to,