A Book and a Chat with Jennifer Archer 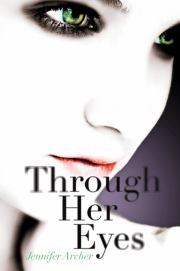 At the age of ten Jennifer Archer decided she wanted to be a writer, life and “sensible” decisions however lead her down a different path training in business and accounting. The spark for writing did not leave her though and in 1993 she enrolled in a creative writing class which was the gateway to launching her first book “Body and Soul” which was released in 1999.
From then on Jennifer’s writing has gone from strength to strength her second novel “Once Upon A Dream” spent several weeks on Borders best selling Paranormal Romance list and she has been a finalist in the Paranormal Excellence Award in Romantic Literature award as well as twice in Romance Writers of America's Golden Heart competition, Jennifer was also a 2006 finalist for the prestigious Rita Award with her mainstream women’s fiction novel The Me I Used to Be.
Now Jennifer is sharing her talents with the YA world with her debut book “Through Her Eyes”
About “Through Her Eyes” (taken from “A Good Addiction” blog)
Every ghost has a story.
The last place Tansy Piper wants to be is stuck in Cedar Canyon, Texas, in the middle of nowhere, with a bunch of small-town kids. But when her mother decides to move to the desolate West Texas town, Tansy has no choice but to go along. Once there, Tansy is immediately drawn to the turret of their rickety old house, a place she soon learns has a disturbing history. But it's the strange artifacts she finds in the cellar—a pocket watch, a journal of poetry, and a tiny crystal—that have the most chilling impact on her.

Tansy soon finds that through the lens of her camera, she can become part of a surreal black-and-white world where her life is intertwined with that of mysterious, troubled Henry, who lived in the same house and died decades earlier. It seems their lives are linked by fate and the artifacts she found, but as Tansy begins spending more and more time in the past, her present world starts to fade away. Tansy must untangle herself from Henry's dangerous reality—before she loses touch with her own life forever.
The story has already received many great reviews, it is a ghost story set in two separate settings, flash backs to the 1930’s mixed with modern day. The characters many will be able to relate to, Tansy because of her constant moving being somewhat of outsider, something that Jennifer herself can relate to. The story does a great job mixing paranormal with realistic.
As one reviewer put it…
Well crafted and well written Through Her Eyes is evenly paced with chapters that flow smoothly from one to the next. Archer seamlessly breaths life into her characters, giving them defined depth and meaning - even the ghostly characters that fill the pages. Especially Tansy who is portrayed as being realistically honest and believable, a character that exudes an array of emotions. Readers will instantly connect with her and the cast of both living and dead characters that surround her.
A second YA book “The Shadow Girl” is due out early next year, so lovers “Through Her Eye” will not have long to wait for Jennifer’s next book.
So listen now and share an interesting, and entertaining show as I chat with my special guest today on A Book and a Chat with Jennifer Archer

You can find out more about my guest at:
"Jennifer Archer - Through Her Eyes"

Email ThisBlogThis!Share to TwitterShare to FacebookShare to Pinterest
Labels: A Book and a Chat, Body and Soul, Jennifer Archer, Once Upon a Dream, paranormal, Romance, The Shadow Girl, Through Her Eyes, YA