A Book and a Chat with Marcia H Black 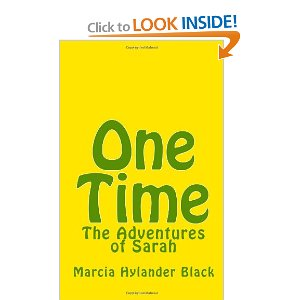 My very first guest on “A Book and a Chat” way back in 2009 was Kim Smith who has been on with me several times since then, but now we have another member of her family on the show today when I host “A Book and a Chat with Marcia Hylander Black”.
Her debut book which she wrote over ten years is partly based on her own life and happenings on a farm “not near anywhere” in Tennessee.

The book “One Time: Adventures of Sarah” was originally written for her four children and eight grandchildren to answer there "what was it like when you were young?" questions.

“One Time: Adventure of Sarah” is partially fictional tale of a young girl whose innocent adventures lead her into hot water more often than not. An eight year old philosopher, her observances of life and people in general are timeless and hilarious.

While based around the adventures of an eight year old girl it written in such a way that people of all ages will read and enjoy the book. Like a real “Little House on the Prairie” as one reviewer out it…

This book is a great, easy read for all ages. The story centers around one smart little Southern country girl, who is no "belle" by any stretch of the imagination. Sarah gets into scrapes, engages in hilarious high-jinx and comes of age in the 1940s South with the help of her part-time nemisis/part-time collaborator, her brother.

Highly recommended as a "beach read" or Book Club pick. It had me laughing out loud!

As I often say it is one of those books that all ages will enjoy.

So listen now and share an interesting, and entertaining show as I chat with my special guest today on A Book and a Chat with Marcia H Black

You can find out more about my guest at:
"Marcia H Black - One Time"

Email ThisBlogThis!Share to TwitterShare to FacebookShare to Pinterest
Labels: A Book and a Chat, Adventures of Sarah, book for all ages, childhood adventures, growing up, Little House on the Prairie, Marcia H Black, One Time