A Book and a Chat with MJ Allaire 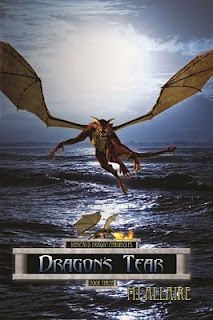 Author, fellow book signer and friend MJ Allaire makes a welcome return to today’s “A Book and a Chat” to share about her books, self publishing and even appearing as a wench in the court of King Richard.
If you have seen me signing around New England would normally see me working with this great author, as the St George the knight always goes well with a person who has written about dragons.

MJ started writing her young adult fantasy series in 2005, for her eldest son, then 15, however from the first book "Dragon's Blood", MJ went on to produce “The Prisoner” and “ Dragons Tear” as books two and three of the now “Denicalis Dragon Chronicles” . Just to show she was not all about dragon as she then produced “My Blissful Life As a Submariner's Wife”

Imagine yourself as a young mother; half the world away from loved ones as a military dependent, then compound this with the much larger challenge of raising a family by yourself because your military spouse is always gone. No amount of money can replace when an active duty military member misses some of life's major milestones, such as the birth of a child, a baby's first steps, or a high school graduation. Follow one woman as she struggles to provide balance and stability to her dependent children while her husband serves his country. Her trials and tribulations will provide insight to just a few of the challenges faced by today's military family. Think you understand the life of a military dependent? Think again. 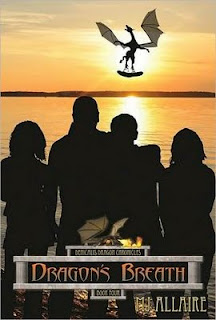 In 2010 MJ produced “Dragons Breath” book four of the Denicalis Dragon Chronicles, then took the step to move from print on demand type publishing to produce and market her own, creating her own publishing company Bookateer Publishing

In book four of the Denicalis Dragon Chronicles series, the reader is invited to follow a group of curious children who set out on a mission to find not only each other, but also the amulets, while finding a solution to save the dragons from evil forces that rule through greed and power.

Will the children succeed through trust and determination as they follow their destiny, or will their efforts become 'Mission Impossible!' Why did the girls trust Kennard, and was he a slimy frog, or a muck dragon? Was an evil spell casted upon Kennard, and by whom? Will the girls be able to save Gruffod, and what was Lotor's intentions? Why is Nivri searching for the missing amulets, and were the dragons able to communicate with each other? What happened to Kennard when he tried to escape at an attempt for freedom, and was a bird laughing at him? How will the girls get to the other side of the mountain? Will they find food to satisfy hunger, and will Tonia ever see her brothers again? Were the rats and turtles Kennard's friends, and did they help the girls? Who provided lights for the girls as their journey began, and who guided the way?

This novel is highly recommended for all fantasy lovers. MJ Allaire takes the reader through another spectacular adventure that not only young adults would appreciate, but parents and teachers as well. The incredible story is educational as magic fills the air, while mystical creatures come to life. Time is running out as the mysterious quest continues. The clock is ticking fast, who will survive, and who will die? Will the journey end with a treasure of memories, or will it end in a nightmare? Why did the Ring of Alyshana strike an emotional chord in Kennard, and did it have special powers? Why was Zacharu held as a prisoner? Two prisoners found freedom, who were they?

Will the missing stones be found? What happens to Kennard, after the girls make it through the mountain, and who will be grieving? This book will indeed capture the imagination as the reader travels through a life-endangering odyssey. "DRAGON'S BREATH" is enchanting, delightful, and as thrilling as WILD AMERICA!

During the show MJ shared with us some of the issues and what sort advantages there can be from publishing your books yourself, before going on to tell us about her latest venture. Selling her books and being a part of the King Richards Faire in Carver MA.

With those medieval appearances spread over the next month followed by signings in the Connecticut building with fellow CAPA authors at the Big E and now book five underway I am sure the name MJ Allaire will soon be spreading around the country as a must read author for all ages.

So listen now and share an interesting and entertaining show as I spend thirty minutes sharing "A Book and a Chat with MJ Allaire".

You can find out more about my guest and their books at:
"MJ Allaire - Denicalis Dragon Chronicles"