A Book and a Chat with Benjamin Kane Ethridge 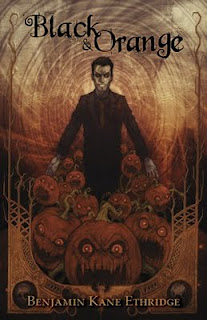 Floods, hurricanes, solar flares or just a dodgy internet connection, all of these and more are sent to try the host of a blog radio show, or so it seems. Today’s show had a difficult start with my guest being there but unable to be heard by myself or the audience. Still once Benjamin Kane Ethridge was able to be heard it was well worth waiting for.

Benjamin is the Bram Stoker Award winning author of the novel Black & Orange. Beyond that he's written several collaborations with Michael Louis Calvillo, one of which is a novella called Ugly Spirit, available in 2011.

Black & Orange came from a brainstorm Benjamin had one Easter about how the holiday didn’t really represent what we Americans have come to see it as, this lead to further thoughts about a different holiday…

“What if Halloween wasn’t what we really thought it was?”

No pagan, druids, Satanists, ghosts, witches etc… what if Halloween was something that could make or break our world, our universe, if it didn’t go right? After that, he began piecing a story together.

On Halloween a gateway opens to a terrifying place of sacrificial magic known as the Old Domain. The Church of Midnight and their diabolic leader, Chaplain Cloth, are hell-bent to keep the gateway open forever.

Martin and Teresa, known as the Nomads, have the mission to prevent a sacrifice from being fed to the gateway. This sacrifice is an energy source that grows in a different person every year. This year, however, things have gotten worse. Teresa’s losing a battle to lung cancer and Martin can’t bare the thought of fighting this battle alone. The Church of Midnight is backstabbing each other-- making internal moves they haven’t before, and the sacrifice this year is something that nobody would ever see coming. Meanwhile, Chaplain Cloth plans to merge the worlds and start his reign of destruction on the universe.

As mentioned this dark fantasy novel Black & Orange has won the Bram Stoker Award for Superior Achievement in First Novel., perhaps opening the door for further success, as Benjamin shared his second novel “Dungeon Brain” is already doing the publisher rounds.
The gremlins had not finished with today’s show and we both had to reconnect at one time, still it was all well worth listening to as we learned much about this award winning author that I am sure will have many hunting for his book, and looking out for further writings of “Benjamin Kane Ethridge”

So listen now and share an interesting and entertaining show as I spend thirty minutes sharing "A Book and a Chat with Benjamin Kane Ethridge".

You can find out more about my guest and their books at:
"Benjamin Kane Ethridge - Black and Orange"