A Book and a Chat with Bonnie Barnett 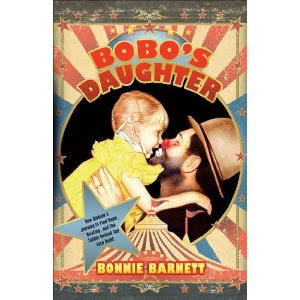 To find out at the age of four that there was such a thing as a Dad, let alone that he famous and then add to that that he was part of a circus with all the strange sites and sounds that environment brings is something a child would remember.

Bonnie Barnett, my guest on today’s “A Book and a Chat” remembers just that, when she met her father the famous “Bobo the Clown”.

One Saturday morning four year old Bonnie’s mom; with Bonnie in tow set out to meet the man Bonnie realized was told was her father. The pair entered a very different world filled with horses and elephants, trailers and trucks and little pens filled with small barking dogs and even a giraffe. It was all a bit overwhelming for a little girl. Suddenly a large person in torn, musty clothing appeared; he had red and black and white paint on his face. Lifting Bonnie the man said, -How about a kiss for your ol daddy?-

Before long a troupe of folks appeared, some wearing face paint, some in sequined costume, they all seemed to know who Bonnie was and; they even her Mom, Dottie. Called Jojo Barnett, Dorothy was the first girl clown.

When Bobo lifted her to kiss her, someone snapped a photograph that was later used on the front page of the newspaper. Many years later, Ro Kim, an incredibly talented artist from Korea was commissioned by Bonnie to paint this moment from a tattered newspaper clipping to give to her father for his 80th birthday. Ro's artistic gift brought this memory to life, and thus begins the tale of Bobo's Daughter.

In Bonnie’s book “Bobo’s Daughter”, from that point the reader is carried along on the journey of a small girl, her tumultuous relationship with her mother and her search for the man who was her father.

Bobo was one of the world’s most famous clowns, a veteran performer for the Shrine Circus, The Ed Sullivan Show, and other productions, well known for his “little car” which now resides in the Clown Hall of Fame. (see fil clip at end of this article)

Though his star persona was always present in the periphery of her life, she rarely heard from him, and the inconsistency of her mother, a former clown herself, only exacerbated her loneliness.

As she entered adulthood, put herself through college, and sought spiritual fulfillment, Bonnie found herself seeking out her father at every turn. It wasn’t until she finally showed up at his doorstep that he stopped being a larger-than-life myth and became a very human father, full of faults, regrets, and love.

Bobo's Daughter offers the reader a peek into the man who was Bobo, the clown and some of the life experienced by those who choose a career in the circus.

What People say about "Bobo's Clown"

"I couldn't put it down . . . it's touching and contains lessons in persistence, following your heart and forgiveness. -- Lynn Polke, Dancer ,Trapeze and Aerialist Artist, Elephant Empress and Animal Trainer, Ringling Bros. Circus

"Working with hundreds of memoirists , no life story has taught me more about how to heal through love." -- Tristine Rainer, Story Editor, Television Producer, Author of Your Life As Story and The New Diary

So listen now and share an interesting and entertaining show as I spend thirty minutes sharing "A Book and a Chat with Bonnie Barnett".

You can find out more about my guest and their books at:
"Bonnie Barnett - Bobo's Daughter"