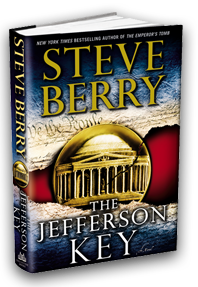 (There is a slight gap at the begining of the show when I lost all my connections, but the show is one not to miss.)

New York Times best selling author Steve Berry is a person I use as a example to other authors, and it was interesting upon having him back as my guest on tonight’s show, that he uses the same example of what happened to him when talking to other users.

Steve has been writing since 1990, and it took him 12 years and 85 rejections (over five different editions) to finally sell a manuscript. Now nine years later his books are printed in 40 languages, and he has kept 12 million readers in 51 countries on the edge of their seats with the exploits of his hero “Cotton Malone”.

Cotton has been having adventures all over the world to all parts of Europe (The Templar Legacy, The Paris Vendetta), Asia (The Venetian Betrayal), Antarctica (The Charlemagne Pursuit), the Middle East (The Alexandria Link) and China (The Emperors Tomb). It’s no wonder that he told Steve that he wanted some time off so will not be back in a fresh story until 2013. That is however not before one last adventure before his break this time through Steve’s latest smash hit of an adventure; “The Jefferson Key” takes our hero to America. 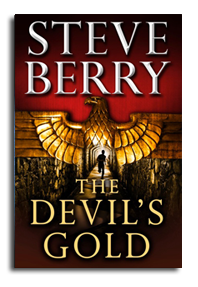 Steve Berry is such a great guest always sharing with us his latest news as well as a few hints along the way about what we might be reading from him next. Now this can also be shared in two ebooks which will introduce to you or perhaps follow up on other characters that appear in both this new book and the "Emperors Tomb" in the form of “The Balkan Escape” and “The Devils Gold”.

We also learned in this show about Steve’s trip to the Middle East along with other “Thriller/Mystery" writers to visit the troops and the great reception they received there.

So what about The Jefferson Key, which is officially launched tomorrow (May 17th)?

Four United States presidents have been assassinated—in 1865, 1881, 1901, and 1963—each murder seemingly unrelated and separated by time.

But what if those presidents were all killed for the same reason: a clause in the United States Constitution—contained within Article 1, Section 8—that would shock Americans?

This question is what faces former Justice Department operative Cotton Malone in his latest adventure. When a bold assassination attempt is made against President Danny Daniels in the heart of Manhattan, Malone risks his life to foil the killing—only to find himself at dangerous odds with the Commonwealth, a secret society of pirates first assembled during the American Revolution.

In their most perilous exploit yet, Malone and Cassiopeia Vitt race across the nation and take to the high seas. Along the way they break a secret cipher originally possessed by Thomas Jefferson, unravel a mystery concocted by Andrew Jackson, and unearth a centuries-old document forged by the Founding Fathers themselves, one powerful enough—thanks to that clause in the Constitution—to make the Commonwealth unstoppable.

The response the author has received from the book is amazing, as he stated normally there are a few who do not like the book for one reason or another yet so far he has received nothing but praise, and I can tell you that I for one also think this is his best book so far!

“One of the most spellbinding and ingenious openings in all of thrillerdom. The cast of characters is huge but every one of them is memorable. The action is intense and masterfully choreographed. As always with Steve Berry, you’re educated about significant things while your knuckles are turning white and the pages are flying. Easily Cotton Malone’s most epic, swashbuckling adventure.” —David Baldacci


"The Constitution. . . secret codes . . . loads of history. . . AND pirates! What else does anyone need? The Jefferson Key won't just haunt your nights--it'll haunt your life. Cotton Malone is coming back to the scariest place of all: Home." —Brad Meltzer

"THE JEFFERSON KEY starts with a bang and holds the reader in its grip until the last page. Fascinating American history, up-to-the-minute politics, pulse-pounding action. This is a story Mitch Rapp would love." —Vince Flynn

You know it’s a sure hit that will soon have the name of Steve Berry and Cotton Malone back on the New York Times Best Sellers list.

Direct link to the show
"A Book and a Chat with Steve Berry".

You can find out more about my guest and their books at:
"Steve Berry - The Jefferson Key"