A Book and a Chat with Fay Lindo Taylor 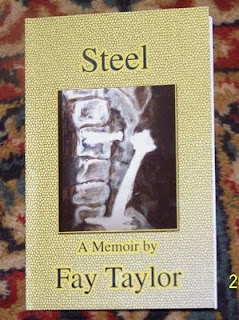 My guest on today’s show is fellow Connecticut author Fay Lindo Taylor.
Born in Kingston, the capital city of the idyllic island paradise of Jamaica, West Indies, Fay migrated to the USA in 1970 eventually settling down meeting her now husband and raising three children in Harford Connecticut

In 1989 a long overdue weekend in the Poconos turns tragic for young Fay Taylor and her husband Charley when she is thrown from a horse, a fall that results in a broken back and severe spinal cord injuries.

Thus begin a series of tragedies for Fay and her family, and it takes everything they have to combat each new challenge being thrown at them. From the depths of despair to triumphant heights and back again, first time writer Fay Taylor takes you on a rollercoaster ride through life, choices and experiences.

This memoir tells the story of a woman whose faith and courage help her remain steadfast like steel. Fay Taylor’s story of triumph over adversity is an inspiration to all who have to live with or care for someone with severe spinal cord injuries, and is a testament to the power of family and unconditional love.

As we learned during the program, “Steel” not just the metal that was inserted into Fay’s spine to help her walk again, but also describes the strength and conviction of this lady who has proved the doctor who told her family she would “never walk again” so wrong.

Her book I am sure will continue to be an inspiration to many.

Direct link to the show
"A Book and a Chat with Fay Lindo Taylor".

You can find out more about my guest and their books at:
"Fay Lindo Taylor - Steel"