A Book and a Chat with Douglas W. Jacobson 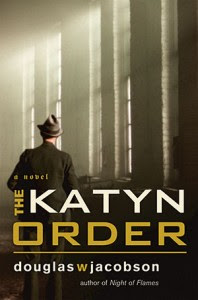 Historical fiction writer Douglas W. Jacobson drops by to chat about himself and his latest book The Katyn Order.

Engineer and WWII buff, Douglas shared with us much about his writing and his historical interest that has led him first to produce the thrilling “Night of Flames”, now being followed by as Library Journal put it…

Night of Flames was the winner of 2007 ‘Outstanding Achievement Award’ by the Wisconsin Library Association.

In 1939 the Germans invade Poland, setting off a rising storm of violence and destruction. For Anna and Jan Kopernik the loss is unimaginable. She is an assistant professor at a university in Krakow; he, an officer in the Polish cavalry. Separated by war, they must find their own way in a world where everything they ever knew is gone. Through the long night of Nazi occupation, Anna, Jan, and ordinary people across Europe fight a covert war of sabotage and resistance against the overwhelming might of the German war machine. The struggle seems hopeless, but they are determined to take back what is theirs

His success will surely be followed up by another block buster hit with The Katyn Order.

The German War Machine is in retreat as the Russians advance. In Warsaw, Resistance fighters rise up against their Nazi occupiers, but the Germans retaliate, ruthlessly leveling the city. American Adam Nowak has been dropped into Poland by British intelligence as an assassin and Resistance fighter. During the Warsaw Rising he meets Natalia, a covert operative who has lost everything—just as he has. Amid the Allied power struggle left by Germany’s defeat, Adam and Natalia join in a desperate hunt for the 1940 Soviet order authorizing the murders of 20,000 Polish army officers and civilians. If they can find the Katyn Order before the Russians do, they just might change the fate of Poland.

Compelling authenticity and evocatively rendered detail will captivate history buffs and thriller fans alike, and I for one am already looking forward to reading Douglas’s next book perhaps about the Belgium resistance underground the “Comet Line”?

So listen to an interesting and hugely entertaining show as I spend thirty minutes sharing "A Book and a Chat with Douglas W. Jacobson"

Direct link to the show
"A Book and a Chat with Douglas W. Jacobson ".

or you can download the mp3 file of the show from
"Douglas W. Jacobson "

You can find out more about my guest and their books at:
"Douglas W. Jacobson - The Katyn Order"