A Book and a Chat with B.A. Chepaitis 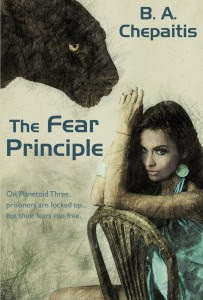 B.A. or rather Barbara Chepaitis has been writing since she could first hold a crayon, though it was not until later on in life she got the series writing bug, which has since produced eight published novels covering many different areas of the writing world, or as Barbara out it... she's "Bitextual"

These books include the futuristic “Fear Series” set of books featuring Jaguar Addams who with Alex Dzarny make the wort criminals on Prison Planetoid 3 face their deepest fears.

The Fear of God

When cult leader Sardis Malocco blows up her sect members she lands on Prison Planetoid 3, where Jaguar must find out if her Apocalypse plans are real.

Jaguar is sent to a home-planet university where she runs into a telekine whose talents might just be more than she can handle.

There's always been something about the moon, and Jaguar and Alex find out what that something is.

As well as this series my guest has also written this series Barbara is also the creator of the critically acclaimed Feeding Christine and These Dreams.
Her first nonfiction book, Feathers of Hope, is about Berkshire Bird Paradise and the human connection with birds.

You can find out more about Berkshire Paradise at "BIRDPARADISE.ORG".

As we heard in the show, she’s writing now writing a sequel to this about Eagle Mitch, a bird she helped our US troops rescue from Afghanistan.
With book 5 of the Fear Series due out soon and book 6 already underway as well as several other ventures, B.A. Chepaitis is a name I’m sure we’ll hear a lot more of in the future.

So listen to an interesting and hugely entertaining show as I spend thirty minutes sharing "A Book and a Chat with B.A. Chepaitis"

Direct link to the show
"A Book and a Chat with B.A. Chepaitis".

or you can download the mp3 file of the show from
"B.A. Chepaitis"

You can find out more about my guest and their books at:
"B.A. Chepaitis - The Fear Principle "