A Book and a Chat with MC Marcus Chapman 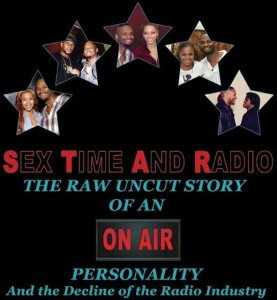 My guest today is known to radio listeners as MC Marcus Chapman. Now he is also the author of the explosive tell-all book “Sex Time and Radio: The Raw Uncut Story of an On-Air Personality and the Decline of the Radio Industry.”

MC Marcus Chapman is an industry captain whose on-air radio personality spans over a decade. His book contains personal experiences with your favorite celebrities, encounters with fans and the dirty business of radio politics, a true page turner about personal strength and growth in an industry where standing up for what you believe will get you replaced by the next broadcast.

From early days doing college radio to becoming the host of some of the most popular radio shows in Chicago, Marcus tells all in the book that has already made it to number 1 at Amazon.

The book is in fact five books in one, and as we heard from Marcus it will soon be re-released as five separate books, so the current version of “Sex Times and Radio” or S.T.A.R will become somewhat of a collector’s item.

The book is actually structured this way due to the events and changes that took place.

Part 1 “Blueprint of a Radio Star” is the path that led to being in radio; as well as the path to being “that dude” sexually.

Part 2 “Rebel Music of a Sex Machine” deals with getting into college radio and the music & events that shaped my attitude.

Part 3 “The Cult of Personality” takes you inside life at Chicago’s top station in the ‘90s.

Part 4 “Road Warrior on the Industry Map” shows you what it’s like to work in professional radio away from your hometown; which is the scenario for many air personalities.

Part 5 “Communication Breakdown” takes you through the decline of the radio industry in the first decade of the 2000s.

About “Sex Time and Radio”

Sex Time and Radio is a tell all book about what went down during MC Marcus Chapman’s time at the radio station, and it includes encounters with celebrities like Beyonce, Dr. Dre, Aaliyah, Michael Jordan, Janet Jackson, James Brown, Vivica Fox, Keyshia Cole, Luther Vandross, LL Cool J, Erykah Badu, and Chaka Khan. It takes you from being on stage at the clubs to backstage at the concerts. It includes backstabbing co-workers, in studio arguments, closed door meetings, top secret information, battles with station management, battles with personal demons, and sexual escapades with some of the hottest women in America. It’s divided into five separate parts and it truly is an interesting and insightful read.

Direct link to the show
"A Book and a Chat with MC Marcus Chapman".

You can find out more about my guest and their books at:
"MC Marcus Chapman - Sex Time And Radio"