A Book and a Chat with Ericka Williams 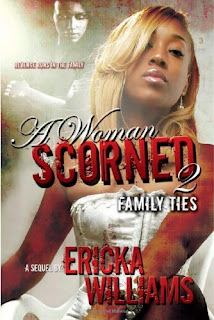 My guest today Ericka Williams tried to appear on the show last week, but a terrible echo on the line meant we had to cut the show short. I’m glad to say that this week the show went fine and we found out lots about this, teacher, actor, director, film producer and author.

From taking creative writing in the 7th grade as well as a writing class in college both of which she loved, Ericka’s never thought of becoming an author.Her break out into the realm of writing did not take place until the death of a family member gave her the desire to tell a story dedicated to her cousin that would address young woman. The result was her first book “All that Glitters”.

About All that Glitters:

“In a place where females are driven by lust and greed, twenty-four year old Mika has deliberately turned away from the structured upbringing her mother worked so hard to give her. She would rather take risks in the streets of New York City with bad boys who could potentially destroy her life, rather than continue her college education and be a responsible mother to her four-year old son.

Her mother and sister are trying to "straighten" her out, but Mika wants to be a bad girl and run with her best friend, Asia, who is ironically on the same path of destruction. Together, Mika and Asia leap head first into a life of money, sex, and drugs.

They both learn the hard way that 'all that glitters isn’t gold' and that money doesn't buy you love; but in the meantime, Mika sets out to use men for every dime they’re willing to give up”

From the self publishing world this book was picked up by a major publisher and was followed by two more success stories. “Shining Star” the second book in the All That Glitters series and “A Woman Scorned”.

Where as the “All that Glitters Series"tends to be for the younger range, the new Woman Scorned set of books is more of a thirty something, and the success of the first book in the series is now followed by Ericka’s latest novel, “A Woman Scorned Part 2-Family Ties”

A Woman Scorned 2: Family Ties is about the ties that bind us. Brielle is facing a murder charge and dealing with the fact that her own cousin, Janay, snitched on her.

The love-hate relationship that Brielle and Janay had has turned to only hate. Neither one knows if the other will continue to betray her, so each woman must make sure that she is the last one standing.

With her a fresh book called “The Robbin Hoods” planed next aimed perhaps a little more towards men, as well as appearing in an appearance in an up and coming film… I’m sure this is not the last we’ll hear of this talented lady.

Direct link to the show
"A Book and a Chat with Ericka Williams".

You can find out more about my guest and their books at:
"Ericka Williams - A Woman Scorned"