A Book and a Chat with Connie Joy 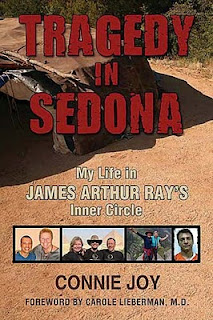 Connie Joy makes a welcome return visit on “A Book and a Chat”, author of the terrific “Tragedy In Sedona. After a little early trouble with both of our phone connections, Joy made today's "A Book and a Chat" a truly fasinating show".

Raised in a very religious Roman Catholic family, Connie had a near death experience which put her on a lifelong path as a student of spirituality. During a truly fascinating show we discussed such things such as past life regression, and how from learning self hypnosis to try and help with her sleep issues suddenly she discovered a past life.

She belonged to several spiritual groups, including leading a Sylvia Browne study group, and was trained as a Practitioner of Hypnosis with emphasis in past life regression.

After watching the movie “The Secret”, Connie attended one of James Arthur Ray’s seminars in 2007 with her husband Richard and signed up for his Harmonic Wealth Weekend (HWW) event held in February, 2007. Over the next three years, Connie and Richard participated in or volunteered for 27 James Arthur Ray seminars and events.

Connie shared with us how what started off as perhaps a path to enlightenment in the end became obvious to be perhaps nothing more than a scam by a super salesman. Money in the hundreds of thousands paid out by people like Connie, instead of going to do good, seemingly found its way into James Arthur Ray pocket.

From walking on fire and glass to the tragic deaths caused at the "Spiritual Warrior" retreat conceived and hosted by Ray at the Angel Valley Retreat Center, Arizona, where two people died and many others were hospitalized after a “Sweat lodge” exercise.

Connie's book "Tragedy in Sedona" is a fascinating read. We learned how attendees, who had paid up to $10,000 to participate in the retreat, had fasted for 36 hours during a vision quest exercise before the next day's sweat lodge. During this vision quest, participants were left alone in the Arizona desert with a sleeping bag, although Ray offered them Peruvian ponchos for an additional $250. With these same items on sale at under $30, it makes you wonder where the money went to?

We spent some time updating on the current trial James Arthur Ray, best-selling author and self-help guru, who mixed New Age philosophy with Native American ritual, who is currently the center of a reckless manslaughter trial.

It is very hard to understand some of what went on not only went on before the events on October of 2009, when 55 participants paid $10,000 each to join Ray near Sedona for a week of meditation, which was to be followed by a “rebirth” during a sweat lodge ritual. The event lead to three tragic deaths and several others very seriously injured, to the indifference of the event leader.

There is so much to hear about what went on, so my advice is listen to the show, but more importantly read Connie’s great book, you will be shocked at some of the things you learn.

So sit back and listen to today's interesting and entertaining show as I host today's "A Book and a Chat with Connie Joy".

Direct link to the show
"A Book and a Chat with Connie Joy".

You can find out more about my guest and his books at:
"Connie Joy - Tragedy in Sedona"