MYM A Book and a Chat with Alan Gratz

When Alan Gratz realized that “the force” was not with him, that he did not have the mental power to make model airplane spin in a certain direction, his dreams of becoming a Jedi master faded. Instead Alan started writing. At first a one page news sheet for people in his street called “Blue Spring Lane News”, shortly followed by a book he produced in his fifth grade called “Real Men Don’t Eat Spinach” (a play on “Real men Don’t Eat Quiche”), a copy of which still exists.

From this early start Alan went on to study creative writing, writing over 6000 radio adverts, plays, articles and two as yet unsold books. Then along came “Samurai Shortstop”.

The idea for “Samurai Shortstop” came when Alan was looking through a travel guide and came across a picture of a man in a kimono throwing out the first pitch at a baseball tournament in Japan in… 1915! Around thirty books studied later Alan had a story about a boy blending bushido with baseball, and Alan had his start on the road to publication from which he’s never looked back.

This first book was followed by the so far first two Horatio Wilkes mysteries, loosely based on Shakspear plays with as we heard during a really entertaining show links to modern day issues.

Loosely based on the Champion Paper controversy, laced around Hamlet, Something Rotten tells about a stinking-rich family. A reeking paper plant. A murder most foul. Something is definitely rotten in Denmark, Tennessee, and only 17-year-old detective Horatio Wilkes can sniff out the killer.

A Scottish Highland Fair turns foul when its beloved founder is found dead in his tent. Horatio Wilkes is on the case, but he'll need all his snark and all his smarts--and a little "Amazing Grace"--to bring the killer to justice.

After this a jotted down idea of generations united through baseball, had Alan signed up for a fresh book before head even started writing. From this start perhaps his best novel so far “The Brooklyn Nine” came to life.

The story of nine "innings," or nine generations, of Schneider children from 1845 to the present. Their lives and their enduring connections to Brooklyn, baseball, and American history.

Alan shared with us not only about his past books and what he is working on now, but also his next publication due out early next year… “Fantasy Baseball”. 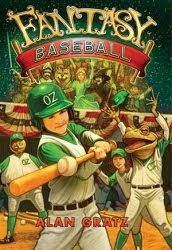 Aflying monkey in the outfield. A toad at short. Dorothy from The Wizard of Oz on the mound. Alex Metcalf thinks he’s dreaming, but the Oz Cyclones exist here in Ever After, where storybook characters live on as long as kids in the real world believe in them.

But Alex isn't a storybook. To get home, he and the Cyclones will have to win the Ever After Baseball Tournament and earn wishes from the Wizard of Oz. Trouble is, the Big Bad Wolf wants a wish too.

To win the tournament, Alex and the Cyclones will have to defeat the wolf, play the best baseball of their lives, and find the courage to believe in themselves. But what good is believing in yourself if the real world stops believing in you?

Direct link to the show
"A Book and a Chat with Alan Gratz".

You can find out more about my guest and their books at:
"Alan Gratz - "Something Rotten", "The Brooklyn Nine"