MYM A Book and a Chat with Estevan Vega 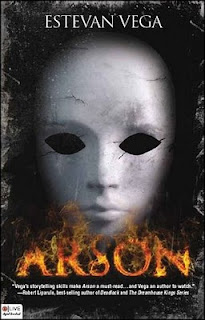 As we come to the last two days of my Male YA Author Month, it’s great not just to have a fellow Connecticut author as the guest on today’s show, but also a person whose appeared on the show before.

Then in the fifth grade, writing short essays for a rather standoffish teacher ignited the literary fire that is still burning. Using his imaginative father as a springboard for ideas, Vega set out to write a full manuscript. His dream to become a published author came forth when he was just 15 years old, releasing his first literary creation, “Servant of the Realm”, to the world, a story about a teenager who sees the future deaths of those he loves and tries to change it.

“The Sacred Sin”, his second book, was published when he was 18, and shows a darker edge and deeper intensity than his first effort. The captivating novel bleeds with honesty and emotion, telling the story of Jude Foster, a cynical self-loathing detective, assigned to bring down a serial killer capable of stealing victim's souls without ever touching them.

These first two books sent the ripples out into the world of YA novels, making the small waves that would become much larger ones when his next book “Arson” was launched.

Arson Gable feels like a freak. He can create fire. He never asked for it. He never wanted it. But he can’t shut it off.

Before now, three things were true: he both loved and despised his grandmother; his life was going nowhere; and he was alone. But when a strange girl-who feels more normal behind a mask than inside her own skin-moves in next door, Arson hopes to find something he's never had: purpose. Using what he fears the most about himself, Arson must face his consuming past and confront the nightmare that is present as he walks the fine line between boy and monster. Dark, moody, and breathtakingly relevant, Arson, the chilling chronicle of an isolated boy with unimaginable ability, is sure to ignite the hearts and minds of a new generation.

From signing books in movie theaters to running a band festival to promote his book, Estevan has moved into the world of YA literature like a breath of fresh air, his following growing all the time. As he shared with us, the follow up for Arson is almost completed and I’m sure with that book those ripples will spread even more across the YA literary pond.

Direct link to the show
"A Book and a Chat with Estevan Vega".

You can find out more about my guest and their books at:
"Estevan Vega - Arson"