A Book and a Chat with Natalie Gayle 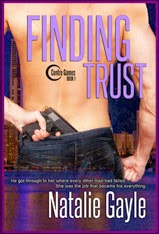 In her teens Natalie Gayle, author of Finding Trust and the guest on today’s “A Book and a Chat” took an occupational test and it said I should be a writer. She did not think anything more of it creating a career as a project manager in IT, all the time though this longing to become a writer was there bubbling under the surface.

As we learned during an entertaining though due to phone issues a sometimes interrupted show, this hidden need to write finally produced Natalie’s debut novel “Finding Trust” which was released earlier this year and has been followed by “Finding Judgment”.

Finding Trust is not your normal romance novel, it is part contemporary romance, part romantic suspense, and part science fiction ...or paranormal romance with some urban fantasy thrown in for good measure. The result however is a book that many are already stating is a “must read” and one that you just can’t put down.

He’s hot, sexy, and leads a double life. Sometimes in the limelight, mostly in the shadows. Brayden James holds fast to a secret that’s more than his to share.

She’s a singularly focused veterinarian out for a rare night of fun with friends, at a New Year’s Eve rock concert. Going home with the lead guitarist was furthest thing from Rihanna Mason’s mind when the night began.

When Rihanna inadvertently becomes the target of a deadly terrorist plot using the Hendra virus as a biological weapon, Brayden is forced to reveal his other life.  His job is to keep her safe and together they must stop the terrorists before it’s too late. But what happens when she becomes more to him than just the assignment?

Will the secret he cannot disclose ultimately prove too much for Rihanna’s fragile trust in relationships? Or will he finally break through the double brick walls around her heart, where every other man has failed?

As one reviewer stated about what she liked about the book…

So listen now and share an interesting, and entertaining show as I chat with my special guest today on A Book and a Chat with Natalie Gayle

You can find out more about my guest and their books at:
"Natalie Gayle - Finding Trust"