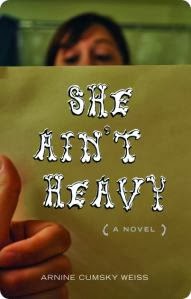 If my guest had followed her childhood dream I could have been chatting to an interior designer on today’s show, instead Arnine Cumsky Weiss followed a career as a nationally certified sign language interpreter and a teacher of English as a second language. She has worked in the field of Deafness for over thirty years including signing at events from presidential speeches to a Broadway play, even at the childbirth of ten babies.

Along the way she has written six books, the first of which Becoming a Bar Mitzvah: A Treasury of Stories,was inspired by her oldest son surviving cancer. Arnine’s first novel “The Undefeated” was rolling around in her head for 20 years before she wrote it, using her own knowledge and experience. “The Undefeated” is a coming-of-age story of two young men set in northeastern Pennsylvania during the turbulent times of the civil rights movement. The book focuses on friendship and loyalty as each young man finds himself faced with adversity.

“In the aftermath of 9/11, I was fascinated with the stories of the people who were supposed to be in the towers that morning and were not. I wondered if they realized they were given a second chance and what they did with it. Although I changed the setting from New York to Philadelphia, I kept the theme of She Ain’t Heavy about getting a second chance.”

Just when counter clerk Teddy Warner is about to be evicted from her Scranton apartment, she bumps into beautiful, brilliant, blond Rachel – her estranged childhood friend whose mother forbid their friendship thinking Teddy was beneath them.

Teddy and Rachel reconnect over hot chocolate and under New Year’s Eve fireworks.  Their discussion leads to an invitation. Soon, Teddy’s on her way to Philadelphia, where Rachel is a student, to share an apartment and begin an exciting new life in the City.

Teddy views Rachel as perfect.  Rachel can’t bring herself to shatter the image by letting on that she is having an affair with a married man. Just when Teddy is starting to feel at home, Rachel insists on some privacy.  Acting out her anger at being asked to stay away, Teddy indulges in a one-night stand.

When Teddy returns to their apartment the next morning, Rachel is being carried out on a stretcher – the victim of carbon monoxide poisoning. This unforeseen tragedy leaves Teddy alone in a strange city, with no money, no friends, and no connections.

As Teddy struggles to find her way, she meets a mentor at the same university Rachel previously attended who takes an interest in her, but with strings attached. She also develops a unique bond with the firefighter who rescued Rachel.  And yet, Teddy remains committed to helping Rachel get back on her feet, at a time when no one else who supposedly loves her can accept her in this diminished way.  Along the way, Teddy discovers her own strength in the roles of caretaker, lover, and friend.

If you love a strong female character, one with a lot of spunk and desire to survive against the odds, then pick up a copy of “She Ain't Heavy”. We can all learn a thing or two from a character like Teddy. So listen now and share an interesting, and entertaining show as I chat with my special guest today on A Book and a Chat with Arnine Cumsky Weiss

You can find out more about my guest and their books at:
"Arnine Cumsky Weiss - She Ain't Heavy"

Email ThisBlogThis!Share to TwitterShare to FacebookShare to Pinterest
Labels: A Book and a Chat, Arnine Cumsky Weiss, Barry Eva, Becoming a Bar Mitzvah: A Treasury of Stories, deafness, getting a second chance, Radio Show, She Ain’t Heavy, sign language interpreter, The Undefeated