A Book and a Chat with DV Berkom 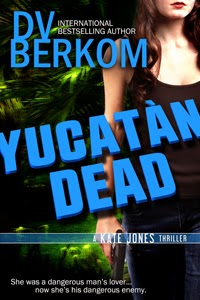 Always having this driving force to write, DV’s first effort was created at the age of seven. After attempts with fantasy and mystery, DV found her true vocation writing two bestselling thriller series.

Her first, the “Kate Jones Thriller Series”, which include Bad Spirits, Dead of Winter, Death Rites and Touring for Death began as an online serial. Her second, “The Leine Basso Thriller Series”, features former assassin Madeleine (Leine) Basso, whose past returns to haunt her in “Serial Date” and “Bad Traffick”.

Her Obvious love of her love of creating resilient, kick-*ss female characters stems from a lifelong addiction to reading spy novels, mysteries, and thrillers, and longing to find the female equivalent within those pages.

DV normally gets her ideas from the news. Something hits her between the eyes and she can ‘see’ the main characters, and many of the secondary ones. The “Kate Jones Thriller series” for instance began when reports of rising cartel violence began trickling north. The book Serial Date was my response to the over-abundance of scripted reality shows and DV wrote Bad Traffick after watching a documentary on child sex-trafficking.

DV’s latest book is "Yucatan Dead" the sixth in the  Kate Jones series it is  set in steamy Mexican jungle as Kate hides from a ruthless drug lord who was her former lover.

About “Yucatan Dead” : (taken from the authors web site)

She was a dangerous man's lover--now she's his dangerous enemy.
For Kate Jones, being on the run from her former lover—the vicious leader of a Mexican drug cartel—was never going to be easy. But with a new identity, a new lover, and a new life in Arizona, she was beginning to believe she'd made it through the worst.

Then, in an act of twisted revenge, Kate's kidnapped and imprisoned by her deadly enemy, his intention to force her to pay back the money she stole before he kills her.

Fate intervenes and she finds herself working against the cartels deep in the Yucatan with a group of rogue commandos. From peaceful northern Arizona to the steamy jungles of Mexico, Kate Jones must decide for herself if she'll continue to run...

...or turn and fight the evil that pursues her.

As the Pacific Book Review stated…”Yucatán Dead is a gripping thriller with a gutsy heroine and a tightly woven plot; it will no doubt please Berkom's current fans and gather more.”

I for one have joined those fans of today’s guest DV Berkom.

So listen now and share an interesting, and entertaining show as I chat with my special guest today on A Book and a Chat with DV Berkom

You can find out more about my guest and their books at:
"DV Berkom - Yucatan- Dead"