A Book and a Chat with William Elliott Hazelgrove 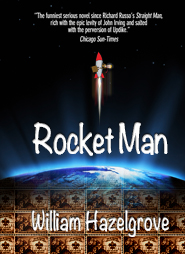 My guest on today’s show is award winning author William Elliot Hazelgrove.  Born in Richmond, Virginia but has also lived in Baltimore and Chicago. He attended Western Illinois University where he received his Master of Arts in history. He settled in Chicago and began writing full time. His first novel, RIPPLES, was published in 1992 and awarded "Editor's Choice" by the American Library Association.

He is also the author of TOBACCO STICKS. MICA HIGHWAYS, his third and his latest novel “ROCKET MAN” were written in the most novel of settings, the attic of the Hemingway Birthplace Home.

About Rocket Man: (taken from Amazon)

The Catcher in the Rye for the Great Recession, Rocket Man defines a new upside down American Dream. Dale Hammer is the every man who is trying to find himself.

Rocket Man is a very funny and poignant comment on our times, when an upside down middle class is barely hanging onto the American dream. Taking cues from the calamity of The Great Recession, we meet Dale Hammer, a man who is determined to find meaning in a landscape of suburban homogeneity, looking for the moment he had with his own father when they blasted off a rocket on a wintry evening. He feels his son slipping away as he tries to get around "the silent shame of fathers and sons."

He becomes the Rocket Man for his sons scout troop and immediately his life implodes. Accused of cutting down the subdivision sign to his neighborhood, he becomes the lone rebel, going down in a flaming arc. When Rocket Day comes, Dale is determined to give his son more than his father gave him.

The book is one of those that will grab you and not let go and I am sure one that will resonate with many people. It has received comments like…

“ROCKET MAN manages to capture the transcendent, heart-wrenching and soul-rending quality of a man leading just this kind of life, a life that will be familiar to many entering or moving through mid-life.

“Sometimes a Dream is All You Have...The PItcher...A broken down World Series Pitcher coaches a Mexican boy to pitch for the highschool team”.

So listen now and share an interesting, and entertaining show as I chat with my special guest today on A Book and a Chat with William Elliott Hazelgrove

You can find out more about my guest and their books at:
"William Elliott Hazelgrove - Rocket Man"