A Book and a Chat with Harris Gray 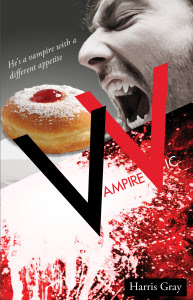 On today’s “A Book and a Chat” I have half of author “Harris Gray” which is the pen name for Allan Harris and Jason Gray”.  Allan used to come into Jason’s Coffee house/Pub and bounce ideas off owner Jason, partnership soon blossomed and the two have been writing together for about seven years. Luckily the families also get on well together even to being able to put up with the two co authors who I am sure spend as much time laughing as they do creating novels.

The whole idea of writing about a vampire was partly due to the two families and their being into the new world of vampires; however their novel is far from the traditional vampire.

In “Vampire Vic” the hero Victor Thetherson (even the name sounds like an accountant) is a bald, middle-aged, fat, accounting manager whose life is far from the normal vampire experience.

Fat, balding accountant Victor Thetherson hoped becoming a vampire would turn his life around. But Victor can’t stomach confrontation and gets queasy at the sight of blood. Instead he gets it from the blood bank, diluted in bloody Bloody Marys. The result: a vampire who doesn’t bite, and a man who gets no respect.

Victor’s slacking staff mockingly calls him Vampire Vic. Victor’s boss amuses his wife by intimidating Victor on video. His ex makes him stay out late while she entertains boyfriends in the house she insists they continue to share. One night it finally boils over, and Victor bites someone. And then another…and very soon, he’s no longer visiting the blood bank.

Muscle replaces fat, and his comb-forward widow’s peak takes root. Victor basks in newfound attention and respect, at the office and at home. But real vampires get hunted, and as the transformation reaches the tipping point, Victor must decide how much he’s willing to sacrifice for the power of the vampire.

The work of the two authors molds well into each other and you can only guess that much of the edited out parts will provide interesting reading.

I found Vampire Vic to be a very entertaining story about a not so typical vampire. I will try to avoid any spoilers but I think I can tell you that Vic didn't choose to become a vampire and his daily life is miserable...until he starts biting people. Then everything starts to change and he has more questions than answers. The book takes you through this vampire's daily life and how he and his vampirism evolves. I found it very funny and endearing and it was a great book to read while on vacation!

I myself think it is a great book to read at anytime, a book that will have you, as another reviewer put it… “like a cheerleader at the side lines really wanting this guy to win”.

So listen now and share an interesting, and entertaining show as I chat with my special guest today on A Book and a Chat with Harris Gray

You can find out more about my guest and their books at:
"Harris Gray - Vampire Vic"