A Book and a Chat with Demitria Lunetta 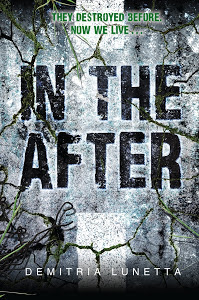 Today’s show is one of my one hour specials as I introduce Demitria Lunetta another of the members of the Class of 2K13 the debut YA authors of 2013 with her debut book “In The After”.

Always interested in reading while younger Demitria studied Human Ecology for her BA, which in a way enabled her to spend countless hours studying the many ways in which people are capable of bringing about their own destruction.  An ideal background some might say for somebody writing a novel about post-apocalyptic survival. An environment that for Demitria at least, must include being able to still have a bar of chocolate available.

As we learned during the show, the time Demitria took researching the publishers and agents that would be the best fit for her book. This proved to be time wells spent as when the manuscript was sent out she received offers from no less than five offers of representation from agents.

About “In The After”:  (Taken from “Auntie Spinelli Reads” blog)

They hear the most silent of footsteps.
They are faster than anything you've ever seen.
And They won't stop chasing you...until you are dead.
Amy is watching TV when it happens, when the world is attacked by Them. These vile creatures are rapidly devouring mankind. Most of the population is overtaken, but Amy manages to escape—and even rescue “Baby,” a toddler left behind in the chaos. Marooned in Amy’s house, the girls do everything they can to survive—and avoid Them at all costs.

After years of hiding, they are miraculously rescued and taken to New Hope, a colony of survivors living in a former government research compound. While at first the colony seems like a dream with plenty of food, safety, and shelter, New Hope slowly reveals that it is far from ideal. And Amy soon realizes that unless things change, she’ll lose Baby—and much more.

Rebellious, courageous, and tender, this unforgettable duo will have you on the edge of your seat as you tear through the pulse-pounding narrow escapes and horrifying twists of fate in this thrilling debut from author Demitria Lunetta.

The book to start with is a little like “I Am Legend” but the characters and some major twists in the story make it a novel you just can’t put down.

“In the After” is a page-turning dystopian thriller with a compelling heroine. The bond Amy and Baby form is strong, yet tender and I was hoping for a great outcome for them both. A romance is alluded to for Amy but it doesn't really go anywhere, so if you're looking for the cookie cutter love triangle, you won't find it here. The world building is riveting, the pace fast and the plot tense and hopeful. I can't wait for the next one!!

Due to be released on June 25th “In The After” might be Demitria’s debut book but the follow up is already in the editing stage, and I believe there will be many to follow

So listen now and share an interesting, and entertaining show as I chat with my special guest today on A Book and a Chat with Demitria Lunetta

You can find out more about my guest and their books at:
"Demitria Lunetta - In The After"

Email ThisBlogThis!Share to TwitterShare to FacebookShare to Pinterest
Labels: Book and a Chat, Class of 2K13, Debut author, debut YA author, Demitria Lunetta, In The After, page turning, post-apocalyptic survival, pulse pounding