A Book and a Chat with David Snow 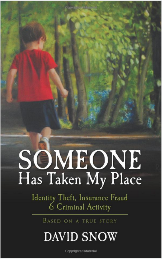 As we here all the time on TV, radio and in the news papers identity theft is the fastest growing crime in America. Incidents have reached around 10 million cases a year in the US, every minute around 20 people fall victim of identity theft.

My guest on today’s A Book and a Chat is David Snow, whose book “Someone Has Taken My Place” shares with us a true international chase, investigation and capture of Insurance Fraudster who stole identities of deceased Irish babies.

David is the real-life investigator who handled the case on which SOMEONE HAS TAKEN MY PLACE is based: it involved Jeremy Cochran, a Texan who traveled from Dallas to Ireland intent on creating fresh identities from Irish babies who died around 1975, the time of his own birth.

The plot hit home hard in many ways for David having lost his own son Andrew in 2003 at the time of his birth.  This perhaps motivated David to get to the bottom of what at first glance looked like a simple insurance fraud but turned out much more.  David felt compelled to share the story, hoping that in some way to give justice to the parents whose children’s identities had been used for committing crime.

About “SOMEONE HAS TAKEN MY PLACE”:

Based on actual facts of the case, the novel follows Stone as he chases the Cowboy across Europe and the United States and–with the help of FBI, ex-KGB and CIA agents, the Secret Service, Interpol and the Irish police force–pieces together the Cowboy’s web of illegal aliases and criminal intent. Just how did a Texan travel to Ireland and obtain so many official Irish passports?
What is the evil secret at the heart of the multiple identity thefts?
Will Stone catch the Cowboy in time for the innocence to be restored to the children’s identities?

As David shared with us on the show, his book has already lead him to appearing on Ireland's longest running chat show and won him many plaudits around the world.

It’s David’s hope that  “SOMEONE HAS TAKEN MY PLACE” will alert readers to the problems of insurance fraud and identity theft, and to educate them “that ripping off of insurance companies is a crime we all pay for and how law enforcement, working together, can stop it

So listen now and share an interesting, and entertaining show as I chat with my special guest today on A Book and a Chat with David Snow

You can find out more about my guest and their books at:
"David Snow - "