A Book and a Chat with K.F. Ridley 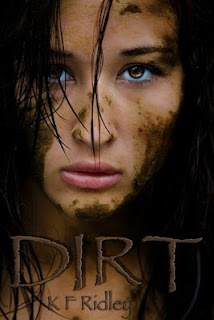 I first came across my guest on today’s “A Book and a Chat” when I was hopping from site to site checking out various new books on “The Next Big Thing” blog week, where people shared what they were writing or releasing as their “Next Big Thing”. While hopping from blog to blog I came across K. F Ridley’s” page and her new book “Dirt”, since then I have been trying to get her on the show and finally here she is.

K.F Ridley or rather Kim, has always had what can only be described as a wild imagination,  a place she used to go to escape from her own world which had its own issues. From studying opera, to a career in nursing, all the time there was bubbling underneath,  a world ready to explode into this world. Finally Kim was able to share some of the multitude of stories that were filling her head in her first novel “The Curse of Yama” Book 1 of The C Walker Adventure series, which is to be followed later this year by book two “The Castle of Family”. The series is sort of Indiana Jones with a little bit of fantasy and who done it mixed in, mid grade series, for all ages. That might sound strange but it is a series that all will enjoy, and Kim already has another 3 books in the series ready to be shared with readers.

The book that I picked up on during “the Next Big Thing” was “Dirt” the first book of a trilogy that is now available for readers.

Ashe has just entered college and is studying Art, she leads a simple life and has pretty much brought herself up because her oddball father is so dedicated to his scientific research in a lab under their house, where he occasionally resurfaces to dig and bury stuff in the back garden or give her the medicine for her unknown condition. One day, on her way home, she realises she is being followed by a black camero and speeds off, luckily the car turns in a different direction… this time…. But he comes back, again and again and eventually makes contact. Just who is this man ‘Rowen’ and why is he following her around? It’s usually her best friend Taylie who get attention from the boys.

That isn’t the only odd thing to happen to Ashe though, but it starts a chain of events that will change Ashe’s life completely, leaving her to wonder just who she is… until Rowen takes her somewhere in the name of protection and she finds out, the thing is, they want her blood……and they want her dead!

As we learned during the show the follow up books “Sand” and “Clay” are almost ready, and going by the comments and reviews for “Dirt” already have many people asking for their release date.

I came across K.F. Ridley as the “Next Big Thing” and I think her “Dirt” trilogy will be just that.
So listen now and share an interesting, and entertaining show as I chat with my special guest today on A Book and a Chat with K.F. Ridley

Direct link to the show
A Book and a Chat with K.F. Ridley

or you can download the mp3 file of the show from
" K.F. Ridley"

You can find out more about my guest and their books at:
" K.F. Ridley - Dirt"