A Book and a Chat with Temujin Hu 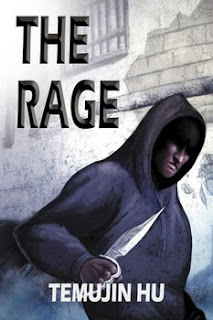 Temujin Hu pronounced “too mu gin who” is my guest on today’s “A Book and a Chat” talking about his life and his debut book “The Rage”.

Though he started writing (mainly screen plays) at the age of 15 life got in the way and his life until this last year took a different path. He is much travelled in fact he has called over thirty different locations home through his life. After spending over four years in the US Navy in the 90's, and a couple of years in his family-owned internet business, latterly he spent more than six years doing professional security in Los Angeles, Kuwait, Iraq, and Afghanistan.

Though he has dabbled in screen writing over this period it was not until earlier this year that he gave up a job he actually liked and that paid very well, doing mobile security in Iraq, so that he could finally commit to his passion for writing.

Since then the writing has flowed and the result is his debut novel “The Rage”.

The Rage is about two men, Roland and Nicolas, as they struggle to deal with traumatic circumstances. The neglect and abuse in Roland’s life lead him to believing crime is his lot, and his emotional struggles drive him all the way to murder. Nicolas enjoys a comfortable life until Roland takes much of it away, and his resulting obsession with revenge drives him to crime. The two almost cross paths numerous times but miss each other until a mysterious racket tries to recruit Roland and kill off Nicolas, which will bring the two together in a bloody end.

The book explores emotion in a gritty and raw way mixed an intriguing spiritual realm. It is Christian fiction the takers you to the low level of crime, drugs and violence.

A nice departure from the normal cat-and-mouse thriller. Neither of the main characters are what you'd traditionally call a good-guy or bad-guy, which leaves room to interpret their actions and life choices for what they are. The author manages to make me dislike what they do and who they are, yet still be sympathetic to why they do it and hope for what they can still become. Like the previous reviewer said, this is different from your typical "Christian" fiction -- it doesn't gloss over the ugly parts of life, nor does it give easy answers. In fact, the only thing that even places The Rage in the "Christian" fiction category is the author's refusal to separate the spiritual realm from the the earthly one.

Overall, the pacing is very good and the language is easy to follow. You can tell the author has had some experience with the subject matter given the level of technical detail, which helps the in-story world-building. It can slow the pacing a little for those unfamiliar with those details (myself included), but it doesn't really detract at all -- I still devoured the book in 3 days...! I understand this to be the author's first published effort, so I'd say it's not quite Mosley-level yet, but definitely in the Patterson-vein of writing (similar feel as the Women's Murder Club, etc.). The author really only focuses on the two main characters, so I didn't really bond with many of the side characters, but that's OK, since the story primarily revolves around the intersection and near-misses of the main characters. That having been said, I did connect with the main characters - both their good and bad sides -- and found myself rooting for both, even though they were on conflicting paths.


So listen now and share an interesting, and entertaining show as I chat with my special guest today on A Book and a Chat with Temujin Hu

You can find out more about my guest and their books at:
"Temujin Hu - The Rage"