A Book and a Chat with Jack L Brody 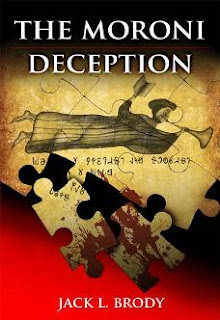 On today’s “A Book and a Chat” I talk with Jack L Brody author of the suspense thriller, “The Moroni Deception”.

Jack is x-military, and an avid traveler who dabbled with screen plays during his army days and afterwards went to film school to learn the screen writing craft. These screen plays might have made him famous, but you’ll have to listen to the show to find out just why.

Always fascinated by history, politics and architecture,  Jack used this love to not only write “The Moroni Deception", but also on another two books he has underway.

About “The Moroni Deception”: (Taken from Blogcritics)

The presidential election is just around the corner and it looks as though charismatic Republican candidate and Utah senator Brockston Ratchford is going to win. The fact that his wife has been brutally murdered and his daughter kidnapped has only gained him public sympathy.

However, his wife isn't the only one whose throat has been cut from ear to ear and whose forehead has been marked with strange symbols. A retired history professor by the name of Martin Koplanski has suffered the same fate, and the fact that he's the author of a book that apparently doesn't sit well with the powers that be in the Mormon Church doesn't look like a coincidence.

New York Times journalist Chenault begins working on the story. With the help of Rachel Potter, a fledgling reporter for the The Salt Lake Tribune, he sets out to investigate the murders. Soon, a dark grim history begins to emerge, one of ancient artifacts, secret societies, and a mysterious prophecy that points to none other than Senator Ratchford.

Who, in fact, is The Prophet? Who is meant to be The Great Restorer? As the clock ticks and the presidential election approaches, the bodies pile up.

The book is a fast moving page-turner in the tradition of The DaVinci Code, one that will be relished by fans of suspense thrillers.

This is a page-turner political thriller that will keep you wanting more! If you like Dan Brown's novels then you will certainly love this book! The Dan Brown comparisons are inevitable; however this book has been well researched and presents facts about the Mormon religion that I did not know.

This book is very relevant to our political times particularly now and I think that anyone would find it a very interesting, exciting, and enlightening novel. Definitely one of the better books that I have read recently! I hope that the author has another book that I can read!


So listen now and share an interesting, and entertaining show as I chat with my special guest today on A Book and a Chat with Jack L Brody

You can find out more about my guest and their books at:
"Jack L Brody - The Moroni Deception"