A Book and a Chat with Luke Murphy 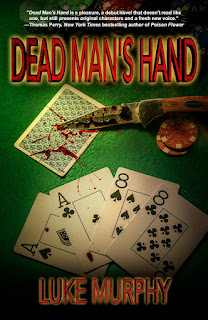 My guest today is Luke Murphy one time ice hockey starlet and now lighting the writing world as the author if adventure thriller “Dead Man’s Hand”.

Born in a small rural community in Western Quebec his dream growing up in a location where you learned to skate before you could walk was to become and ice hockey star.

When his mother lost her battle with cancer he decided to out his mind to his dream. The fact he was only 5’9” and weighing 160 pounds in a time when ice hockey was looking for big bodies on the ice did not put him off and he won many awards before using his one ice talent to get a hockey scholarship to Rochester Institute of Technology where he gained Bachelor of Science degree in Marketing with a Minor in Sociology.

He went on to get called upon by the Florida Panthers and though he got to play only four games in the NHL he had a career all be terminated early through injury, he had a carrier in the minors terminated by an serious eye injury.

Knowing that dream had come to the end he returned to his home town and not only started a career as coach but also writing for a local paper, so began his drive to becoming an author.

From NFL rising-star prospect to wanted fugitive, Calvin Watters is a sadistic African-American Las Vegas debt-collector framed by a murderer who, like the Vegas Police, finds him to be the perfect fall-guy.

…and the cards don't fall your way?

When the brutal slaying of a prominent casino owner is followed by the murder of a well-known bookie, Detective Dale Dayton is thrown into the middle of a highly political case and leads the largest homicide investigation in Vegas in the last twelve years.

The book has received many great reviews, several remarking that the book which is in the style of James Patterson or Rick Mofina, does not have the feel of a debut book.

I loved how the book kept me in the dark right till the very end! The author made me sympathize with his protaganist Calvin Watters through excellent character building, and I was definitely rooting for him! I believe the author took some serious time doing research for this novel, it was educational AND entertaining for me! A terrific debut! I look forward to more work from Luke Murphy in the future.

Well another book is already underway reviewer, and as we discussed during the show perhaps then a follow up on “duck duck goose”….


So listen now and share an interesting, and entertaining show as I chat with my special guest today on A Book and a Chat with Luke Murphy

You can find out more about my guest and their books at:
"Luke Murphy - Dead Mans Hand"