A Book and a Chat with Kathryn Burak 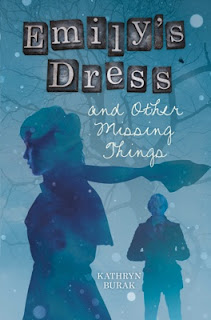 Even though we are coming to the end of 2012 we are still lucky enough to have some of the Class of 2K12 sharing with us their debut YA novel, and today is one of those one hour specials that we reserve for the YA debut authors. I am pleased to say that today on “A Book and a Chat” I have Kathryn Burak author of “Emily’s Dress and Other Missing Things” as my guest.

Kathryn started got the writing bug with success when a letter she wrote to Santa was chosen to be read on a local radio station at the age of seven. This plunge into stardom was the start of Kathryn’s journey into the literary world. It was followed by an appearance in Highlights magazine when her letter appeared in the “Letters from Near and Far”. After which she received pen pal requests from 37 people in countries all over the world, Kathryn of course wrote back to everyone.

Further success followed for Kathryn with poems being published in “West Branch” and “The Gettysburg Review” and eventually after over thirty rejections (including three by the eventual publisher) she managed to get her first short story published.

Her career carried was on the up but the major novel had not yet surfaced, Kathryn shared with us the amazing story of how she “eventually” found and agent and then how that followed up with the production of her debut YA novel “Emily’s Dress and Other Missing Things”

About “Emily’s Dress and Other Missing Things” (Taken from Amazon)

When Claire’s best friend Richy went missing, he disappeared without a trace. But when Emily Dickinson’s dress goes missing from the Amherst museum, she knows exactly where it is: in her closet.

As Claire and her student teacher, Tate, attempt to figure out what do to about the dress, they begin to uncover the truth behind Richy's disappearing act. Following a trail of clues across state lines, Claire and Tate attempt to find the person that Claire knows in her gut is responsible for his disappearance..

Top of Form
“Emily’s Dress and Other Missing Things” was launched this month and is already proving popular with YA readers. As one reviewer put it…

I read this book in one sitting and found it beautiful and haunting. Claire is prickly and compassionate, vulnerable and strong; I grew to love her as she navigated her way through grief, loneliness, and first love. Her darkly funny internal monologue added both levity and depth to the story, and Burak's writing is spare, elegant, and lyrical--a respectful tribute to Dickinson herself. This one is not to be missed.

Kathryn Burak might be one of the last 2K12 authors to debut but her book has been well worth waiting for.

So listen now and share an interesting, and entertaining show as I chat with my special guest today on A Book and a Chat with Kathryn Burak

You can find out more about my guest at:
"Kathryn Burak - Emily's Dress And Other Missing Things"

Email ThisBlogThis!Share to TwitterShare to FacebookShare to Pinterest
Labels: Class of 2K12, Emily's Dress And Other Missing Things, Kathryn Burak, YA