A Book and a Chat with Pola Muzyka 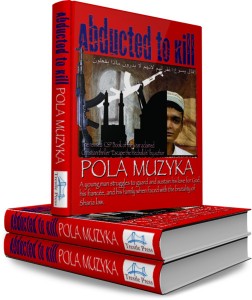 My guest on today’s “A Book and a Chat” is another of those multi-talented people who have gone from success in on artistic mode to another. Pola Muzyka was raised on a sheep farm, and her love for the outdoors is still something she holds onto.

Her artistic route however has lead her through modeling, a  career as a dramatic actress, having worked in both starring and feature roles in Hollywood-based motion pictures. She has showcased her visual art in many galleries and currently hosts a television series for baby boomers. Add to that her being accomplished award-winning TV, commercial and corporate writer and now an award winning author and you can see just how talented Pola is.

Pola’s passion lies in her relationship with Jesus Christ, this has lead her not only to her touring  India as a media missionary where she produced documentary films helping pastors in various countries. But also founding her own founder of the internet based, “Christian Media Alliance”.

Her book originally entitled “Escape the Hezbollah” has now been re-edited and released as “Abducted to Kill”.

After moving to Iran, a young American named Joseph Rabbani, is brutally abducted and commanded to train in a terrorist camp. As part of his training he is forced to kill people who share his Christian faith in order to survive and warn his fiancée.

Joseph discovers a hidden agenda behind his abduction to kill. The plot to plant sleeper cells in the U.S.and Europe until Islam can take over prompts him to escape at all costs to save his loved ones.

Her book has already won the “Christian Small Publisher Book of the Year” and Pola has a sequel “The Freedom Inside” coming out later this year.

As one reviewer who called it “off the charts powerful!” put it…

Absolutely floored! When you've finished reading this book, you will understand the horrors of an Islamic government and in your mind's eye see some of the most horrific truths about how the Hezbollah treats women, children and men who dare resist. I was particularly stuck by their cold and heartless treatment of orphaned and abandoned children.

Yet in the midst of all that harsh and horrid reality lies a story of courage and love, and faith, brilliantly interwoven between pillars of power, fear and pure evil.


So listen now and share an interesting, and entertaining show as I chat with my special guest today on A Book and a Chat with Pola Muzyka

You can find out more about my guest and their books at:
"Pola Muzyka - Abducted To Kill"

Email ThisBlogThis!Share to TwitterShare to FacebookShare to Pinterest
Labels: Abducted to Kill, Book and a Chat, Christian Fiction, Christian Small Publisher Book of the Year, Escape the Hezbollah, Pola Muzyka, The Freedom Inside