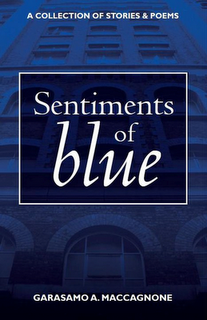 So before the show started I just knew with my lack of pronouncing names correctly I’d have trouble with today’s guest Garasamo Maccagnone, thank goodness after one try he allowed me to call him “Mac”.

Mac, as I am now going to call him, was one of five children being raised in what can only be described as hard times. His father as we learned was quite a character, the story of how he climbed out the bathroom window to dress up as a tramp and try and sell his wife vouchers was shared with us.

His ambition of becoming a baseball star was thwarted by an arm injury so he concentrated more on his writing, though as we learned the baseball line was not that far away in some of his stories.

The founder of a successful airfreight business, Mac now focuses on his literary career.

His first book was a children’s book story, The Suburban Dragon a story about a family interacting and having fun on their own, without the aid of a computer, television, or video game.

His novel St. John of the Midfield was created after his sons were signed up to play soccer only for Mac to find he’d also been signed but to coach the team. This lead the baseball play, don’t know anything about soccer Mac to have to learn the game. The story, "St. John of the Midfield," is fairly accurate as to how he came to understand the game and who taught him.

Other writings by Mac are “For the Love of St. Nick” and a collection of short stories entitled, My Dog Tim and Other Stories.

His latest though production is Sentiments of Blue a short story collection.

About Sentiments in Blue:

Set in a Michigan factory, the title story takes readers inside a workplace dominated by a ruthless bully and his cronies. While explaining the actions taking place around him, it becomes clear that the narrator yearns to escape the blue-collar life handed down to him from his father. “Perfect Game” unfolds during a minor league baseball game with Chi-Chi Gomez on the mound, a fearless pitcher who never fails to brush a few batters back from the plate–a space he considers his personal property. Along with other stories, the book also features original poems including “Uncle Nardo’s Store,” “My Father’s Foot,” and “The Malediction of Miss Holstein.”

With another novel under way and if his daughter has anything to do with it a further children’s book, I am sure we’ll hear more about Garasamo Maccagnone

So listen to an interesting and hugely entertaining show as I spend thirty minutes sharing "A Book and a Chat with Garasamo Maccagnone".

You can find out more about my guest and their books at:
"Garasamo Maccagnone - Sentiments of blue"