A Book and a Chat with Carrie Harris 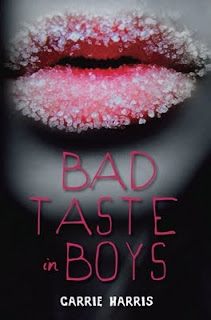 Carrie Harris (no relation to the villain in my book “Across the Pond” I’m sure) is one of the wonderful group of debut YA authors for this year, part of the class of 2K11. Before the show there was some doubt as to if Carrie would be able to make the show travelling with her family as she was. The start of the show where we lost complete connection to Blog Talk Radio, followed by a disconnection for Carrie could have been a worry, however once the initial gremlins were out of the work we went on to have a truly enjoyable “A Book and a Chat” with this popular YA author, that was full of interest and humor.

An assortment of jobs that included an autopsy coordinator/statistician, managing the place that researches Mad Cow disease in humans, and spending a lot of time looking at brains and body parts, was an obvious background for her to write a book about Zombies. That and of course her obvious sense of humor has produced her debut YA Novel “Bad Taste in Boys” which even before its launch this week has produced hugely exciting responses and reviews around the blogosphere.

Not the least of these is the way people have picked up on the “sugar lips” on the books cover… (Zombie football players…sugar lips? Your guess is as good as mine) pictures and information of which can be found on her terrific web site.

Carrie tried to produce her first book during the NaNoWriMo but the planned fantasy satire and somehow turned into a political satire halfway through. Eventually she decided to stop trying to write something serious and wrote with her obvious humor producing something that got the attention of her agent “Kate Schafer Testerman” the first novel started doing the literary rounds, but it was “Bad Taste In Boys” which sold in about a month.

About “Bad Taste In Boys”

Super-smartie Kate Grable gets to play doctor, helping out her high school football team. Not only will the experience look good on her college apps, she gets to be this close to her quarterback crush, Aaron. Then something disturbing happens. Kate finds out that the coach has given the team steroids. Except . . . the vials she finds don’t exactly contain steroids. Whatever’s in them is turning hot gridiron hunks into mindless, flesh-eating . . . zombies.

As stated the book has before its launch date this next week received some terrific reviews, as one fellow author wrote…

“BAD TASTE IN BOYS is a nonstop romp, with more mayhem than a mall full of mocha-chugging monkeys. I loved watching Kate try to keep her sensible, scientific head amidst rampaging zombies and amorous football players (often the same people). Bring me my next dose of Carrie Harris NOW!” – Jeri Smith-Ready

A follow up book currently called “Bad Hair Day” which you might guess from the title might include werewolves is already in the editing state, so we know this great new book will not be a one off, and we’ll hear more of the name Carrie Harris in the future

You can find out more about my guest and their books at:
"Carrie Harris - Bad Taste in Boys"