A Book and a Chat with Elizabeth K Burton 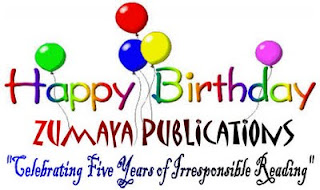 After a failed attempt at a show yesterday due to line issue it was good to have my guest back on today’s show with both of us able to hear and understand each other and able to produce a great show to share with the listeners.

Normally on the top of the blog pages I have a picture of the cover on one of my guests books, though my guest on today’s “A Book and a Chat” is indeed an author in her own right, she is far more than that, hence this picture.

Elizabeth, or rather Liz Burton, is the multi-talented editor of Zumaya Publications a small press publishing house based in Austin, Texas, and has been the home of many wonderful and talented authors. Her and some of her authors are currently touring the blogosphere to celebrate their fifth year anniversary with a month long birthday bash... hence the birthday picture.

As we learned during the show Liz and Zumaya have todate published more than 200 titles in all areas of ﬁction as well as some superb nonﬁction, many of which have won awards. Gideon by Chester Aaron was selected the silver medal winner in the YA-Cultural/Historical category of the Moonbeam Children’s Book Awards, her own The Everdark Gate received the Dream Realm Award in Fantasy for speculative fiction in ebook format, and Busting Loose: Cancer Survivors Tell You What Your Doctor Won’t by Cheryl Swanson received the silver medal in the Living Now Book Awards.

Publishing 20-25 titles annually, Zumaya is one of a new breed of book publisher utilizing up-to-date technology in new ways… I’m sure we’ll hear from some the authors Liz and Zumaya have helped become published authors in future shows.

So listen to an interesting and hugely entertaining show as I spend thirty minutes sharing "A Book and a Chat with Elizabeth K Burton".

You can find out more about my guest and their books at:
"Elizabeth K Burton - Zumaya Publications"