A Book and a Chat with Wayne Zurl 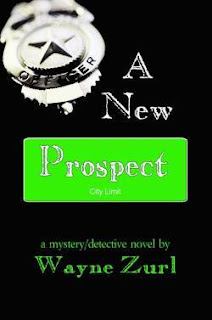 My guest today Wayne Zurl was born in New York and grew up on Long Island. During the Vietnam War he served on active duty with the Army and later in the reserves, after which he worked for twenty years for the Suffolk County, New York Police Department. While writing his debut novel “A New Prospect” his hero Sam Jenkins has been appearing in several short “travel time” audio books, in some ways creating a following before the book or is it the book adding to the audio following? Whichever it was a great pleasure to have Wayne on the show today.

Sam Jenkins the hero of Wayne’s writings has much perhaps to do with Wayne himself as much as some of the characters he’s met through is many years in the police force, though is not all Wayne has been involved with on the creative side. Indeed as he shared with us during the show he was asked to help out with the TV show TOUR OF DUTY in the 1980s, though he did not make it to the filming which was being done in Hawaii.

About “A New Prospect”

Sam Jenkins never thought about being a fish out of water during the twenty years he spent solving crimes in New York. But things change, and after retiring to Tennessee, he gets that feeling. Jenkins becomes a cop again and is thrown headlong into a murder investigation and a steaming kettle of fish, down-home style.

The victim, Cecil Lovejoy, couldn’t have deserved it more. His death was the inexorable result of years misspent and appears to be no great loss, except the prime suspect is Sam’s personal friend.

Feeling like “a pork chop at a bar mitzvah” in his new workplace, Sam suspects something isn’t kosher when the family tries to force him out of the picture.

It is a book that will take the reader through all the twists and turns of a great murder mystery, with some laugh out loud moments at times. With the second novel already completed plus the several short stories already there with a growing following I’m sure the names of Sam Jenkins and Wayne Zurl will be around for some time.

Direct link to the show
"A Book and a Chat with Wayne Zurl".

You can find out more about my guest and their books at:
"Wayne Zurl - A New Prospect"