A Book and a Chat with Aaron Patterson 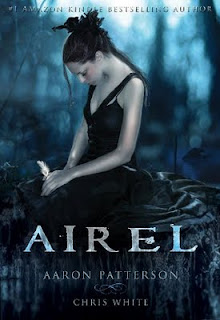 Today’s show guest is Aaron Patterson author of the best-selling “WJA” series, as well as two Digital Shorts: 19 and The Craigslist Killer, who has now launched a new YA novel called “Airel”.

Aaron was always one for reading but never thought his literary skills would enable him to write, now he has become a bestselling author who enjoys writing even more than reading.

His first nove in the “WJA” series "SWEET DREAMS" was published in 2008 receiving some mixed reviews as it was one of those “love or hate” novel, though as it went on sales increased and more and more were on the “love” side. With the launch of the second book in the series “DREAM ON" sales increased enough so that Aaron could follow his dream and become a full time writer. A third book in the series “IN YOUR DREAMS” will be out soon.

Along with the “WJA” set of books, Aaron has also produced two short stories which are also selling well on Kindle, “The Craiglist Killer” and “19”. During the show Aaron discussed how the sales of his novels and short stories even just for 99 cents on kindle all add up. Now having his own publishing company he is not only able to produce his own books, but help other authors as well.

Aaron’s new book “Airel” looks like being another smash hit with great reviews and a second story already completed and ready to be released perhaps at the end of this year.

For a start the cover is fantastic, one that will catch any book shop browsers eye. Within Airel there are two different stories, that merge into the one story in such a way that the reader will never feel lost, nor ever want to put the book down. Written in short chapters with the knack for leaving the reader hanging, dying to know what is going to happen next.

About Airel: (review from Café of Dreams)

The main story focuses on Airel, a young teenage girl, who has lead quite a normal life until one day she meets a gorgeous stranger and new guy at school, Michael. He is everything she had ever dreamed of and most incredibly, he is into her in a big way. However, that isn't the strange thing. The crazy thing is that all of a sudden Airel becomes more and more beautiful - not a flaw in sight, upon her skin or hair, wounds suddenly heal within seconds and worst of all - a killer is on the loose, claiming to know "what" Airel is.

The second story, which takes place throughout Airel, is about Kreios and an ancient family of fallen angels, during the time period of 1250 BC. Kreios has lost his beloved wife and will do anything to protect his young infant daughter from the Seer and their enemies. But will he be able to keep her safe forever and before it is too late?

The book is a story of imagination and fiction, with lifelike characters and some moral thoughts. Airel is a great story that will have the reader wanting more (you’ll have to wait until the end of the year for that) it is highly recommended to everyone - male, female, young and the young at heart.

Direct link to the show
"A Book and a Chat with Aaron Patterson".

You can find out more about my guest and their books at:
"Aaron Patterson - Airel"

Email ThisBlogThis!Share to TwitterShare to FacebookShare to Pinterest
Labels: A Book and a Chat, Aaron Patterson, Airel, Dream On, Fallen Angel, In Your Dreams, Sweet Dreams, WJA, YA author