A Book and a Chat with Frank Zaccari 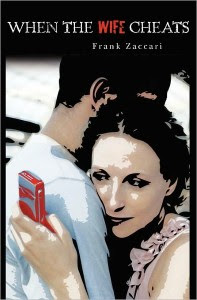 On “A Book and a Chat” today I have author Frank Zaccari.

Frank had what he thought was an extremely rewarding life–until his wife of 25 years had an affair and left both the marriage and their two teen daughters. While stats show that around 22% of married men have strayed at least once during their married lives, however an astonishing to find out that 14 % of married women have done the same. A figure that is not equally portrayed in the numerous TV shows, films and books about “infidelity”.

When Frank found out what had been going on behind his back for three years, though his children knew they were obviously torn between loyalties, and broken promises of the affair having ended.

Counselors, social workers and sociology professors shared with Frank that a woman walking away from her family is a relatively new development, that this is the first generation in the U.S. where the wife/mother abandons the family, and that there is little to no research on the impact this behavior will have on children, particularly daughters.

When male friends and acquaintances spoke to Frank, he was amazed just how many wanted to share their own similar experiences with him. I was very surprised–I had no idea so many men had been victimized by infidelity.

During counseling it was suggested to Frank that he write a book about what had gone on, something added to by several other who contacted Frank to share their own situations. The result is the wonderful fictional story "When The Wife Cheats."

About “When The Wife Cheats”:

In our society the act of infidelity is usually associated with the husband. But what happens when the wife cheats? Very little is written about how the husband and children deal with the lies, deceit, betrayal and abandonment when the wife violates the marital vows. Follow one man’s journey as he and his two young daughters cope with the devastation that occurs “When The Wife Cheats.”

“I was so moved by the raw openness of this book. Men never talk about how this affects them or how they deal with the hurt and pain their children go through”.

The rise of the University of Washington volleyball program is an amazing turn-around management success story. Read the inside story on how ten turn-around management principles were applied to build an elite collegiate athletic program. With an enlightened leader who has the commitment and courage to do the right things, these principles can be used for any type of organization.

Direct link to the show
"A Book and a Chat with Frank Zaccari".

You can find out more about my guest and their books at:
"Frank Zaccari - When The Wife Cheats"

Email ThisBlogThis!Share to TwitterShare to FacebookShare to Pinterest
Labels: A Book and a Chat, betrayel, deceit, Frank Zaccari, From the Ashes, Huskies, infidelity, male help, Volleyball, Washington, When The Wife Cheats