A Book and a Chat with Geoff Herbach 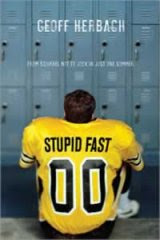 Back in November it was great fun hosting my male YA Author month listening to the sometime forgotten male authors who write for the YA genre, sometimes it’s forgotten that boys read as well a girl and not just fantasy books. That is why it was a great pleasure to have on the show one of the class of 2K11 debut YA authors Geoff Herbach.

While a debut in the YA area his creative juices have seen the light of day in other written and presented areas.

From days spend pounding numbers into computers under artificial light at a bank, Geoff saw the light in more than one way taking and now teaching creative writing courses and producing his first novel “The Miracle Letters of T. Rimberg”.

Written in the Bob Newhart one sided style of conversation, in the form of transcripts between a priest and the suicidal T. Rimberg. Who spends the course of the novel recounting his descent into self-destruction through letters and diary entries.

These take him into a year-long journey from the Midwest to Europe to Green Bay Wisconsin, a trek replete with quixotic adventures in places like a Polish prison, Amsterdam's Red Light District, and the Green Bay Packers football stadium.

It is bluntly lyrical, whiny and philosophical, geekily hip, and sometimes wise even in its histrionic self-absorption. It is Theodore Rimberg's voice that makes this novel sing.

By the end of The Miracle Letters of T. Rimberg, it becomes all but impossible not to love T.'s all-too human frailties, his larger than life passion for small things like White Castle hamburgers and fake maple syrup, his need for love and connection. The story of his life is satisfying too, a surprising tale full of twists and turns and, without giving away the entire plot, hope. The Miracle Letters of T. Rimberg, suicidal anti-hero, is a story about hope, told in a voice that is full of the funny, sad, often rude music of life.

From this start Geoff has spread his creative wings through a musical called “Don’t Crush Our Heart” as well as several radio shows including "The Electric Arc Radio Show", a literary tragi-comedy done in the radio style, which aired on Minnesota Public Radio, and his new radio venture “Tales from the Poor House" that will be broadcast on KMSU out of Minnesota State, Mankato (where he teaches in the English Department).

Several people who read The Miracle Letters of T. Rimberg, loved the style and wanted Goeff to write a YA novel in the same voice, this developed almost overnight into his debut YA novel “Stupid Fast”

Stupid Fast is the story of Felton Reinstein, a fifteen-turning-sixteen-year-old in a rural Wisconsin town whose sudden growth spurt turns him from a small, sad, jumpy, picked-on kid to a powerful athlete.

In Felton’s voice, speaking from his bedroom in the middle of the night, we learn of his broken home, his mother’s intensifying depression, his little brother’s struggles, and the seeming root of all trouble – his father’s suicide ten years earlier, against the back-drop of his growing athletic success, his first love – a young African-American pianist named Aleah, and growing relationships with the same kids who tortured him through-out his childhood.

As his home crumbles, literally and figuratively, Felton finds triumph on the field born of real kindness from new friends, from the support he’s given by Aleah and her father, from his once estranged grandmother’s rescue mission, and, most importantly, from his new understanding of his father, his self, and his potential for both destruction and magnificence. Stupid Fast asks us to know ourselves, to be compassionate, and to be unremittingly passionate about what we love

As one author/reviewer put it… “Stupid Fast captures the rollicking ride of growing up in a broken home with a rare mix of raw honesty and hilarity. The pages race past, powered by a memorable voice, pulling you into the strange and thrilling journey of this Dork turned Jock. In other words: Stupid Fast is Stupid Good!”

And so it is…stupid good… before it is even officially released the word as spread through the blogosphere that at last there is a book that both male and female will love within the YA realm. With his follow up under way (if he does lose anymore due to computer issues) the name of Geoff Herbach is one that will be on many peoples, schools and library book shelves.

Direct link to the show
"A Book and a Chat with Geoff Herbach".

You can find out more about my guest and their books at:
"Geoff Herbach - Stupid Fast"