A Book and a Chat with Gae Polisner 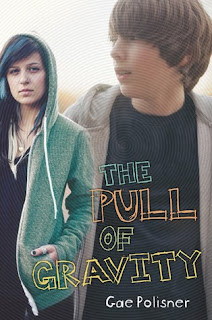 Judging by the photos I have seen of today’s guest on “A Book and a Chat", Gae Polisner must be part mermaid, and the fact that she states she actually writes (not types) in the water only adds to this view.

Gae writes women’s and young adult fiction, though as yet neither of her women’s fiction novels “The Jetty” and “Swim Back to Me” have made it onto the book shelves, though “The Jetty” was a Top Semifinalist in the 2008 Amazon Breakthrough Novel Award.

Instead her debut publication is the wonderful YA novel “The Pull of Gravity”.

She wrote “The Pull of Gravity” as homage to the books she loved as a teenager by the likes of Zindel, Konigsburg, Blume, and L’Engle, with a secret nod to one of her favorite books “Don't Take Teddy, by Babbis Friis-Baastad”, which as we learned during the show has nothing to do with small stuffed bears.

A practicing family law attorney/mediator and a very keen swimmer, Gae waited until her sons had grown up before rushing down the first draft of “The Pull of Gravity“ in one month’s concentrated brain dumping.

The novel is about friendship, first love, and the true nature of family, and for a change written from the view of the boy, which with two sons is something Gae aimed for. The characters you’ll want to become friends with and a narrative voice that sparkles with wit make this a truly original coming-of-age story.

About “The Pull of Gravity”

While Nick Gardner’s family is falling apart, his best friend, Scooter, is dying from a freak disease. The Scoot’s final wish is that Nick and their quirky classmate, Jaycee Amato, deliver a prized first-edition copy of “Of Mice and Men” to the Scoot’s father. There’s just one problem: the Scoot’s father walked out years ago and hasn’t been heard from since. So, guided by Steinbeck’s life lessons, and with only the vaguest of plans, Nick and Jaycee set off to find him.

You’ll learn to love the characters including the quirky female character Jaycee Amato, whose wardrobe includes the liking of warring Troll dolls on a string around her neck.

Gae Polisner's first novel is a big hit. She has a beautiful way with words and is a master storyteller. I was quickly draw in to the story and became very attached to all the characters. It will touch your heart in a very unique way. I always look for stories like this mostly in inspirational novels. While I usually don't read young adult novels, it was recommended by an author friend (Michael J Sullivan). I'm glad he recommended it to me because now I can share it with my daughter and friends. I hope Ms. Polisner continues to write more stories because she is so talented...

With other books already on the road to publishing including her favorite one about “Frankie Sky” I’m sure the reviewers wish will soo be granted.

Direct link to the show
"A Book and a Chat with Gae Polisner".

You can find out more about my guest and their books at:
"Gae Polisner - The Pull of Gravity"

Email ThisBlogThis!Share to TwitterShare to FacebookShare to Pinterest
Labels: 2K11, A Book and a Chat, Coming of Age, delightful read, first love, Gae Polisner, Swim Back to Me, The Jetty, The Pull of Gravity, YA Debut author

That sounds like such a heartfelt novel. I can't wait to check The Pull of Gravity out.
Edge of Your Seat Romance