A Book and a Chat with Lynda Simmons 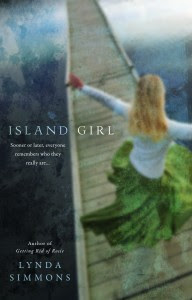 Today’s guest Lynda Simmons was due to be on the show on Thursday, however Toronto traffic meant she missed the show. So when my guest for today’s "A Book and a Chat" had to pull out, she was an obvious replacement and proved to be well worth waiting for.

Lynda is a writer by day, college instructor by night and a late sleeper on weekends. She grew up in Toronto reading Greek mythology, bringing home stray cats and making up stories about bodies in the basement. From an early age, her family knew she would either end up as a writer or the old lady with a hundred cats. As luck would have it, she married a man with allergies so writing it was.

She shared with us during the show about some of her early life including her experience with “paranormal” after the death of her Dad.

Her writers experience started with romantic comedy for Harlequin and Kensington, before she made the leap into mainstream fiction in 2009 with her debut novel Getting Rid of Rosie (Berkley Books). This book was also a comedy but this time the focus was on the female relationships -- mothers and daughters, sisters and friends -- the relationships that shape who we are as women, and have always fascinated her.

Her latest release is a fascinating novel “Island Girl”. It is a novel that will gather you into its pages and not let go. It is a story of family, friendship, forgiveness, and love that delves into the effects of alcoholism and Alzheimer's on a family and in the person's life in a very realistic and upfront manner. Island Girl will grab you emotionally and before you are even a few chapters in to the novel, you will find yourself caring deeply about what will happen to all of these people and you won't be able to put it down until you reach the end.

Set on an island off the city of Toronto, the novel is about hair stylist Ruby Donaldson, who at age 55 discovers she has Alzheimer's and makes plans for herself and her two daughters, Liz and Grace, for after she is unable to function normally. She is surrounded by friends on the island and an ex-lover who are willing to help her, though at first she refuses their advice and offers of help.

Ruby's plans are a surprise and her own plans for herself are somewhat unorthodox. She maneuvers to have her estranged daughter Liz return from Toronto to Ward Island to take care of Grace. The girls have different plans or hopes for their future.

With another new “black comedy” novel already on the way, I’m sure the name Lynda Simmons will be on many people’s book shelves.

Direct link to the show
"A Book and a Chat with Lynda Simmons".

You can find out more about my guest and their books at:
"Lynda Simmons - Island Girl"