A Book and a Chat with Daniel Nayeri

Daniel Nayeri, my guest on today’s “A Book and a Chat” was due to be one of the guests during my Male YA Author Month, unfortunately at the time he fell foul of his own prescient for sampling any type of food. I am very pleased to say, that illness free he was able to join me on today’s show.

Daniel has always been into writing and books, though his other jobs along the way as he described through a very entertaining show, are something else. From working as a builder, where at least he was able to create book shelves, to a fairly unsuccessful bicycle currier, which at least aided him in becoming a stuntman… after all somebody has to cover the cyclist going over the top of the car during a police chase. Daniel has done plenty, including at one time being fairly high class pastry chef.

Then his sister Dina came up with the idea of a book roughly based on “Foust” an idea that soon became the thread for a trilogy. The first book, “Another Foust”, being written jointly by Dina and Daniel, and not without some rough waters along the way, was then joined by “Another Pan” and now as we heard on the show, the trilogy soon to be joined by “Another Jackal”.

One night, in cities all across Europe, five children vanish - only to appear, years later, at an exclusive New York party with a strange andelegant governess. Rumor and mystery follow the Faust teenagers to the city’s most prestigious high school, where they soar to suspicious heights with the help of their benefactor’s extraordinary “gifts.”

But as the students claw their way up - reading minds, erasing scenes, stopping time, stealing power, seducing with artificial beauty - the side-effects of their own addictions. And as they make further deals with the devil, they uncover secrets more shocking than their most unforgivable sins.

At once chilling and wickedly satirical, this contemporary reimagining of the Faustian bargain is a compelling tale of ambition, consequences, and ultimate redemption. 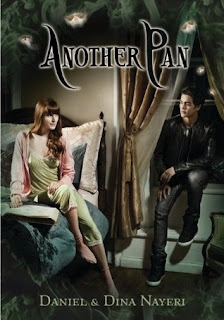 Sixteen-year-old Wendy Darling and her insecure freshman brother, John, are hitting the books at the Marlowe School. But one tome consumes their attention: THE BOOK OF GATES, a coveted Egyptian artifact that their professor father believes has magical powers. Soon Wendy and John discover that the legend is real—when they recite from its pages and descend into a snaking realm beneath the Manhattan school. As the hallways darken, and dead moths cake the floor, a charismatic new R.A. named Peter reveals that their actions have unleashed a terrible consequence: the underworld and all its evil is now seeping into Marlowe.

Of course Daniel is a writer in his own write, and he shared with us about his long titled book (marketing is going to love you Daniel) “Straw House, Wood House, Brick House, Blow”. A book consisting of four novellas, each one written in a different genre.

Direct link to the show
"A Book and a Chat with Daniel Nayeri".

You can find out more about my guest and his books at:
"Daniel Nayeri - Another Foust, Another Pan"

Email ThisBlogThis!Share to TwitterShare to FacebookShare to Pinterest
Labels: A Book and a Chat, Another Foust, Another Jackal, Another Pan, Barry Eva, Daniel Nayeri, Dina Nayeri, Male YA Author, YA Books