A Book and a Chat with M.M.Bennetts 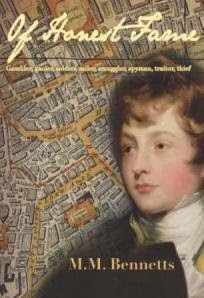 M.M.Bennetts, historical author, accomplished pianist and cross country horse rider, is my guest on a fascinating “A Book and a Chat” today.

Not many people in the US realize that where as quite a few presidents have met an untimely end in America, only one British Prime Minister has been assassinated, and that was Prime Minister Perceval who was killed in 1812. A turbulent time in world history, with Napoleon sweeping across Europe, and all that was going on at the time in England.

After over 50 rejections “M” finally got her book “May 1812” published, closely followed by a second book “Of Honest Fame”. These are the first two of a quartet investigating and sharing knowledge which, some of which as we heard during the program has only recently been discovered or in some cases disclosed.

While “May 1812” takes you into the realms of politics and how England must have been with the shock of the Perceval’s assassination, it also shares much of what life was like during that time period, which is the theme throughout the second book and the two yet to be published.

The whole quartet looks at the world at that time from four different sides, and if “May1812” was the political scene, then “Of Honest Fame” is like a 19th century James Bond story. While we think that spying is a modern event, we learn from “M” writing how nearly every section of the government had its own set of spies from the navy and army to even the Bow Street Runners (early police force).

Just the snippets we learn on this dark cloak and dagger stuff would keep a reader turning the pages of this great pair of books. Add to that the knowledge one learns, the exiting plots, and view of a world that is still shrouded in mystery and you can see why not only are the first two books by M.M Bennett’s already proving hugely popular, but also why many are already asking for the view of that world in the next books.

As we learned from a truly interesting chat, we will be visiting and learning about the historical issues in Italy and Vienna in these next two eagerly awaited novels.

The name M.M. Bennetts might have taken a few rejections before it hit the book shelves, but I’m sure it will be a name that will soon spread around the historical fiction readers throughout the world.

So listen to an interesting and entertaining show as I spent thirty minutes sharing "A Book and a Chat with M.M.Bennetts"

Direct link to the show
"A Book and a Chat with M.M.Bennetts".

or you can download the mp3 file of the show from
"M.M.Bennetts"

You can find out more about my guests and their books at: