A Book and a Chat with Joel M. Andre 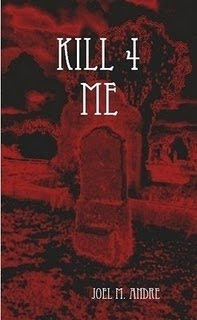 My guest on today’s “A Book and a Chat” is poet and writer Joel M Andre.

Joel always knew he wanted to write, and thanks to the support of his family, and a creative writing instructor named Terrance Pratt who nagged Joel telling him he had a gift, he has gone from writing poetry and now several novels in print.

Early on Joel wrote many poems, eventually he produced a book of many of these items called “Pray the Rain Never Ends” included in the book is a poem he wrote for his nephew Christopher Andre, which shows a different side to the normally darker range of Joel’s writings.

After this first book, Joel went on to write perhaps his own favorite novel “A Death at the North Pole” which shares with the reader a dark journey through a winter wonderland. Unfortunately like my own first delve into creative writing, the book when produced was not as the author wanted it, and I’m glad to say there will soon be a new and very much improved version of this very popular novel available.

Joel’s next creation, as we heard on the program is a technological ghost story called “Kill 4 Me”.

The book is thriller set in rural America, follows Casey Dwyer, a small town girl who becomes caught in a spirit’s unrelenting quest for vengeance after she receives a cryptic and seemingly harmless text message. It is a supernatural thriller that explores how technology can be used to torture others through the lens of a horror novel. Some have said “it shows horror writer Joel M. Andre at his best.”

Fresh off the press we heard about the first book in a possible trilogy called “The Black Chronicles: Cry of the Fallen”...

“On a warm summer afternoon, in Northern Arizona, a double homicide stains the ground with blood. Detectives are called out to handle the investigation, each plagued with their own internal demons, and aren't prepared for what they are about to find.

Detective Lauren Bruni, faces a world of darkness and evil, as a demonic force begins to leash an attack on a small town. As the stakes begin to rise, so does the stunning truth, that not even Lauren can imagine.
In a world where her life had started to fall apart, she must pick up the pieces and push forward in an effort to save those that she loves the most.”

With several more books already written and further books in the The Black Chronicles series underway, Joel continues take the Horror genre and push the boundaries. His is a name I’m sure we’ll hear a lot more of.

So listen to an interesting and entertaining show as I spend thirty minutes sharing "A Book and a Chat with Joel M. Andre"

Direct link to the show
"A Book and a Chat with Joel M. Andre".

or you can download the mp3 file of the show from
"Joel M. Andre"

You can find out more about my guest and his books at:
"Joel M. Andre - A Death at the North Pole"