A Book and a Chat with Soren Paul Petrek 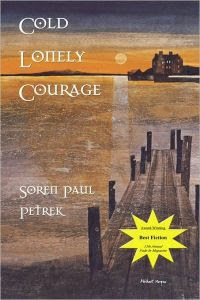 My guest on today’s “A Book and a Chat” is Soren Paul Petrek author of a fascinating novel based on a female character from the Second World War. His book "Cold Lonely Courage" to me stans alongside stories that I grow up with in England from the war, which perhaps have never reached the American shores. “Albert RN”, The Wooden Horse, and in this case “Carve Her Name with Pride”

As we discussed during the show, there are many thousands of unsung heroines whose stories just have not been told, if indeed they were known about. The story told by Soren, is based on such a woman. The fact the story is told from a woman’s point of view alone, makes it the sort of book that will appeal to female readers, who normally turn off when they hear that the book is a war story. Cold Lonely Courage is a novel that will appeal to ALL.

The action begins during the German Blitzkrieg attack on France in the opening days of World War II. The heroine, Madeleine Toche races to the front to find her brother dying after his unit is destroyed as the Germans advance. Crushed, Madeleine returns his body to her parents. In the months that follow, Madeleine is raped by a Nazi officer. Seeking revenge she kills him and flees to England to volunteer for duty with Britain’s shadowy Special Operations Executive. Trained as an assassin she clandestinely returns to France with Captain Jack Teach a veteran of the SOE ‘Dirty Tricks Department’. They find themselves in love but are torn apart by duty and the insurmountable odds of survival. Madeleine fights on terrorizing the murderous Nazi elite always only one step ahead of capture and torture.

Far from Soren’s normal job which is somewhat in the style of Perry Mason, his writing comes, from knowledge gained in both England and France, where back in the 70’s and 80’s stories were often there to be heard if you’d just spare the time to chat over a cup of tea with the war survivors. Indeed as we were told, the author has his own childhood story to tell from his days in France.

Within “Cold Lonely Courage” Madeleine’s story is raw and driven. There are no detours; it will appeal to the base emotions of readers. It is not an ordinary World War II novel. Cold Lonely Courage tells the brutal truth about the violence people are capable of when called upon to defend themselves and their families.

The courage of women in war is marginalized and given subordinate consideration in popular fiction. This could well be why woman readers turn off at the thought of a war time story; I’m sure Cold Lonely Courage will change that.

You can find out more about my guest and their book at:
"Soren Paul Petrek - Cold Lonely Courage"