A Book and a Chat with Gayle Rosengren 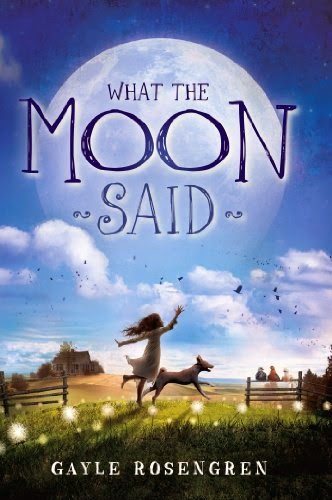 I am pleased to have another of the Class of 2K14 debut YA authors in the form of the talented Gayle Rosengren as my guest on today’s on “A Book and a Chat”.

After developing her writing skills while being copy-editor at American Girl and having written stories for children in Cricket, Ladybug, Jack and Jill and Children's Digest magazines. Along with knowledge gained while working as a children's and young adult librarian at a public library, Gayle has finaly published her debut novel.

Gayle’s debut novel “What The Moon Said” was inspired by events in her mother's childhood. From these memories the seeds grew into a fictional story around the character Gayle imagined her mother to be as a child.

About “What The Moon Said”:  (taken from authors web page)

What the Moon Said is the story of 10 year-old Esther and her family and how their love makes good times better and bad times bearable during the Great Depression.

Their move from the big city of Chicago to a small ramshackle farm in Wisconsin is full of changes for Esther.  Some of them are good, like being able to have a dog at last.  But some of them are bad, like having to use an outhouse because there is no indoor plumbing!

Join Esther on her "great adventure" and find out if she ever earns the hug she yearns for from her mother.   Find out what Esther discovers about luck—good and bad—and about the superstitions so important to her mother.  Find out what the moon said.

Though said to be a YA book, I can this wonderful story of childhood and hope is said to be for the YA audience I can see it being read and enjoyed by those of all ages, and with a second novel already planned to be released in 2105, the name Gayle Rosengrem is one to look out for…. The signs are there.

So listen now and share an interesting, and entertaining show as I chat with my special guest today on A Book and a Chat with Gayle Rosengren

You can find out more about my guest and their books at:
"Gayle Rosengren - What the Moon Said"

Email ThisBlogThis!Share to TwitterShare to FacebookShare to Pinterest
Labels: Book and a Chat, book for all ages, Class of 2K14, debut, Gayle Rosengren, Story of hope, What the Moon Said, YA