A Book and a Chat with Carla Neggers 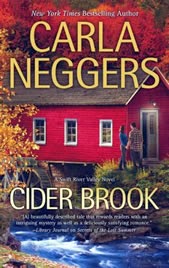 Carla Neggers is a New York Times and US Today best selling author of coming up to 70 novels, which have been translations in 24 languages. However it all started high up in a sugar maple tree which was her escape location from the rest of her large family, and where she first started penning her own stories.

First published when in her early twenties, Carla has gone from producing romance stories, to western, detectives and adventure, along the way selling millions of copies of her work. Her Texas Rangers and U.S Marshall series have been followed by the FBI and Black Falls series.

Over the last few years two fresh series “ Sharpe & Donovan” and “Swift River Valley” have been flowing from this hugely talented author.

Now we have two new books in each of these series.

Being rescued by a good-looking, bad-boy firefighter isn’t how Samantha Bennett expected to start her stay in Knights Bridge, Massachusetts. Now she has everyone’s attention—especially that of Justin Sloan, her rescuer, who wants to know why she was camped out in an abandoned old New England cider mill. 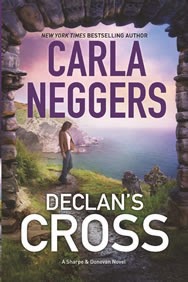 An escape to an idyllic Irish seaside village is about to turn deadly in this riveting new novel by master of romantic suspense Carla Neggers.

For marine biologist Julianne Maroney, two weeks in tiny Declan’s Cross on the south Irish coast is a chance to heal her broken heart. She doesn’t expect to attract the attention of FBI agents Emma Sharpe and Colin Donovan-especially since a Donovan is the reason for her broken heart.

As well as the re-release the Texas Rangers series under the name “The Carriage House” sereis.

About “The Carriage House”:

Neggers delivers a colorful, well-spun story that shines with sincere emotion.” –Publishers Weekly
Fun and a little hard work. That’s all Tess Haviland had in mind when Ike Grantham paid her for her graphic design work with the run-down, 19th-century carriage house on Boston’s North Shore.

So listen now and share an interesting, and entertaining show as I chat with my special guest today on A Book and a Chat with Carla Neggers

Direct link to the shows
Archived versions of the shows

You can find out more about my guest and their books at:
Carla Neggers - Sharpe & Donovan Series and Swift River Valley Series"