A Book and a Chat with John Paul Jaramillo 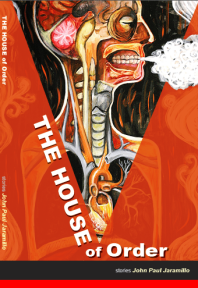 John Paul Jaramillo is my guest on today’s “A Book and a Chat”. He grew up being told stories by a crazy grandfather, something he has always tried to keep up with. A failed poetry writer in his early years he went on to creating as he says “failed stories” before he found his writing style and voice.

Writing in a writing more minimalist style he began to create stories about his younger days in Colorado.


Thus “House of Order” was created, John Paul began getting down stories about the neighborhoods he grew up around in southern Colorado.

He found his inspiration in the old house he’d grown up in and in the old folks of his family.

John Paul has been trying to capture their stories and re-imagine old family stories and myths since then. These have now come together in his debut book “House of Order”

About “House of Order” : (Taken from Amazon)

The House of Order, the first collection of composite stories by John Paul Jaramillo, presents a stark vision of American childhood and family, set in Southern Colorado and Northern New Mexico. Manito Ortiz sorts family truth from legend as broken as the steel industry and the rusting vehicles that line Spruce Street. The only access to his lost family's story is his uncle, the unreliable Neto Ortiz.
The book has already received many great reviews

“Jaramillo creates vivid and engaging characters you can't help but either outright dislike or feel for as their story unfolds before your eyes. I found the dynamic between the father and uncle the most interesting; one trying to teach his children the value of working hard, while the other teaches them how to gamble at the track. Despite the father's (or, the Jefe, as they call him) faults, he does have that good quality about him. He wants his children to do the right things and work hard for what they get in life.

I recommend this book to anyone who likes character-driven stories and are not  put off by bad language and mild adult situations.

The more you read “House of Order” the more you get drawn into the characters and their situations. With another book underway we will I’m sure hear a lot more of John Paul Jaramillo


So listen now and share an interesting, and entertaining show as I chat with my special guest today on A Book and a Chat with John Paul Jaramillo

You can find out more about my guest and their books at:
">"John Paul Jaramillo - House of Order"