A Book and a Chat with Holly Bush 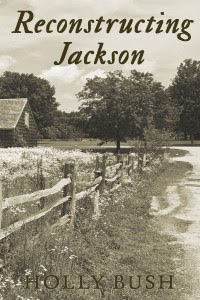 Holly was raised in a house full of books she is a voracious reader of a wide variety of fiction and non-fiction and has been writing all her life.
Life delayed her blossoming into the writer that she has become, in fact she actually wrote two of her books while watching her daughter playing softball.

In 2011 however she produced her first historical romance book “Romancing Olive” set as are her other books in the late 1800’s.
This first book firmly put the name Holly Bush on the historical romance ladder, receiving many praise worthy reviews about her novels and story lines.

This early success was soon followed by a second and equally successful book “Train Station Bride”.

Again set in the late 1800’s and with more travel by train (there is a book coming soon with travel by a boat instead of a train…honest). The again received a very warm response with such comments as

About “Reconstructing Jackson” : (taken from Amazon)

1867 . . . Southern lawyer and Civil War veteran, Reed Jackson, returns to his family’s plantation in a wheelchair. His father deems him unfit, and deeds the Jackson holdings, including his intended bride, to a younger brother. Angry and bitter, Reed moves west to Fenton, Missouri, home to a cousin with a successful business, intending to start over.
Belle Richards, a dirt poor farm girl aching to learn how to read, cleans, cooks and holds together her family’s meager property. A violent brother and a drunken father plot to marry her off, and gain a new horse in the bargain. But Belle’s got other plans, and risks her life to reach them.
Reed is captivated by Belle from their first meeting, but wheelchair bound, is unable to protect her from violence. Bleak times will challenge Reed and Belle's courage and dreams as they forge a new beginning from the ashes of war and ignorance.

I felt like I was transported through time...it has romance, history, villains and heroes...wonderful. One of the things I like most about Holly's novels is that they are so realistic. The love scenes are just enough...if there is a bad guy...there is bad language (just enough...again believable). You are outraged in parts...can understand why Jackson feels how he does and even the hatred some of the other characters hold on to. I loved, loved, loved this book.

With a new book “Cross the Ocean” (yes a boat not a train) coming soon, the name Holly Bush is one that many historical readers will be looking for on the book shelves.


So listen now and share an interesting, and entertaining show as I chat with my special guest today on A Book and a Chat with Holly Bush

You can find out more about my guest and their books at:
"Holly Bush - Reconstructing Jackson"

Thank you so much for the lovely interview, Barry! I had a blast!