A Book and a Chat with "Aaron Paul Lazar" 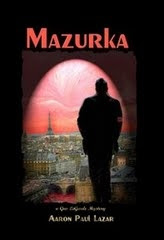 It took eight deaths of family and friends within five years including the death of his father to finally push today's guest on A Book and a Chat to open the flood gates of his creativity. Aaron Paul Lazar, started writing his first book in the "LeGarde Mysteries" at that time, leading to the release of Double Forte in 2004. That was just the start of sharing with the world his creative talents. Since that time a further three books Upstaged 2005, Tremolo 2007, Mazurka 2009 have flowed from Aaron, with another book "Firesong"
.

With already another five books queued for publications, and a new paranormal mystery series "Moore Mysteries" planned for 2010 Aaron is one busy writer.

Aaron shares with us during the show, what lead him to write, how his creativity has blossomed since the first LeGarde Mysteries was penned.He also tells us about many of his up and coming novels during this fascinating, interesting and entertaining thirty minute show.