A Book and a Chat with Suzanne Palmeiri 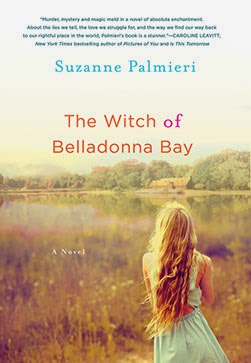 Every so often I get contacted by or have the name of a new author sent to me to see if I think they “might be a good fit for the show”. It is rare that I ever say no, however if the author is a fellow Connecticut author. So I was at the time glad to have her as a guest and now am equally glad to have her back again to find out what she has been up to since our last chat.

After her success with her two debut books  “The Witch of Little Italy” is a book that has international success and . “I’ll Be Seeing You,” co written with Loretta Nyhan under the name of Suzanne Hayes. Comes two more books that are already proving that the quality of success of those debut books was no one off.

In Suzanne's  thrilling new novel, The Witch of Belladonna Bay, readers will learn if love and magic are enough to bring a broken family back together. She along once again with co writer Loretta Nyhan has produced "The Empire Girls" riveting tale of two sisters, set in the intoxicating world of New York City during the Roaring Twenties.

About "The Witch of Belladonna Bay" : (taken from RJ Julia)

Are love and magic enough to bring a broken family back together? The answer can be found in Suzanne Palmieri’s enchanting new novel, The Witch of Belladonna Bay featuring the incomparable Bronwyn – and her magic – once again. This is the much anticipated follow-up to Suzanne’s debut, The Witch of Little Italy, which received high praise.
In The Witch of Belladonna Bay, Bronwyn is forced to return home to Magnolia Creek, Alabama—a place she hasn’t been since her mother, Naomi, died fourteen years earlier—and the troubled family she left behind. With her brother Patrick behind bars for the murder of her childhood friend and her eccentric father, Jackson, at wits end with her eleven year old niece Byrd, Bronwyn finds herself back at her childhood home, the Big House, and surrounded by ancient Magnolia trees dripping with Spanish moss. But before she can even take in what she left behind, she’s wrapped up in the mysteries surrounding the murder and what the “Strange Ways” running through little Byrd might mean. As Bronwyn unravels the secrets behind the murder, long forgotten memories surface, and the magic living quietly inside of her grows stronger, creating an unbreakable bond between her and Byrd—a bond that will define both of their fates forever.

Ivy and Rose Adams may be sisters, but they're nothing alike. Rose, the eldest, is the responsible one, while Ivy is spirited and brazen. After the unexpected death of their father, the women are left to reconcile the estate, when they make a shocking discovery: not only has their father left them in financial ruin, but he has also bequeathed their beloved family house to a brother they never knew existed. With only a photograph to guide the way, Ivy and Rose embark to New York City, determined to find this mysterious man and reclaim what is rightfully theirs.

Once in New York, temptations abound at every turn, and soon the sisters are drawn into the glitzy underbelly of Manhattan, where they must overcome their differences and learn to trust each other if they're going to survive in the big city and find their brother. Filled with unforgettable characters and charm, Empire Girls is a love letter to 1920s New York, and a captivating story of the unspoken bond between sisters.

You can find out more about my guest and their books at:
"Suzanne Palmeiri - The Witch of Belladona Bay"