A Book and a Chat with Mike Bond 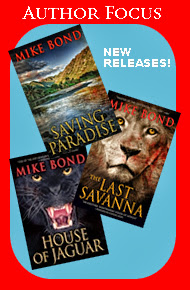 It is a big welcome bacl to my guest on today's "A Book and a Chat" to best-selling novelist, war and human rights correspondent, environmental activist, award-winning poet and international energy expert, Mike Bond.

Mike has lived globetrotting and often dangerous life , he’s  lived and worked in over thirty countries on six continents. An adviser to the US and foreign governments, human rights and war correspondent, award-winning poet and international energy expert, Mike has used his own experience of many dangerous, remote and war-torn regions of the world to enhance his bestselling novels… he is… as the BBC called him…” The master of the existential thriller" .

Mike’s novels are all based on his experiences in far, dangerous corners of the world:


CROSSFIRE: A British undercover agent fights for his life in Beirut at the height of the Lebanese War -- a deep look into the Middle East's ancient wars and hatreds.

FIRE LIKE THE SUN: An international best-seller about U.S. nuclear warheads lost in the Himalayas, a manhunt through Nepal, Iran, Greece, Algeria, France, Virginia and Colorado.

NIGHT OF THE DEAD: Vietnam vet and weed smuggler Joe Murphy loses his plane in a Guatemalan jungle attack, falls in love with the woman guerrilla who heals him, and fights to protect them both as the death squads hunt them down.

THE LAST SAVANNA: A former British commando battles elephant poachers who then kidnap the woman he loves, in this acclaimed inside story of Africa's disappearing savannas, animals and freedoms.

About "The Last Savana": (taken from Authors Web Page)

With Africa’s last elephants dying under the guns of Somali poachers, ex-SAS officer Ian MacAdam leads a commando squad against them, to hunt what for him is the only decent prey – man. Pursuing the poachers through jungled mountains and searing deserts he battles thirst, solitude, terror and lethal animals, only to find they have kidnapped a young archaeologist, Rebecca Hecht, whom he once loved and bitterly lost. She escapes the kidnappers, is caught and escapes again to risk perishing in the desert. MacAdam embarks on a desperate trek to save not only Rebecca but his own soul in an Africa torn apart by wars, overpopulation and the slaughter of its last wildlife.

Based on the author’s own experiences pursuing elephant poachers in the wilds of East Africa, The Last Savanna is an intense personal memoir of humanity’s ancient heartland, its people and animals, the lonely beauty of its perilous deserts, jungles, and savannas, and the deep, abiding power of love.

“Mike Bond takes readers into a literary safari of Africa’s elephant poaching war with The Last Savanna, a novel that expertly captures the ravenous, chaotic and frustrating battles raging across the continent . . . and paints a vivid picture of life in the savanna . . . Bond’s knowledge of the Swahili language, local culture and even the wildlife result in what may be one of the most realistic portrayals of Africa yet . . . Bond’s specialty in producing thrillers that editorialize human weakness and bring to light pressing world problems shines in The Last Savanna.  Dynamic, heart-breaking and timely to current events, Bond’s latest book is a must-read.” –

Mike Bond’s critically acclaimed novels depict the innate hunger of the human heart for good, the intense joys of love, the terror and fury of battle, the sinister vagaries of politics and multinational corporations, and the magical beauty of the vanishing natural world in thrill a minute, page turning, must read adventures.

So listen now and share an interesting, and entertaining show as I chat with my special guest today on A Book and a Chat with Mike Bond

You can find out more about my guest and their books at:
"Mike Bond - Saving Paradise"

Email ThisBlogThis!Share to TwitterShare to FacebookShare to Pinterest
Labels: A Book and a Chat., best selling, FIRE LIKE THE SUN, Mike Bone, must read adventures, NIGHT OF THE DEAD, page turning, SAVING PARADISE, THE LAST SAVANNA. CROSSFIRE, thrill a minute, thriller