A Book and a Chat with Allison M Dickson 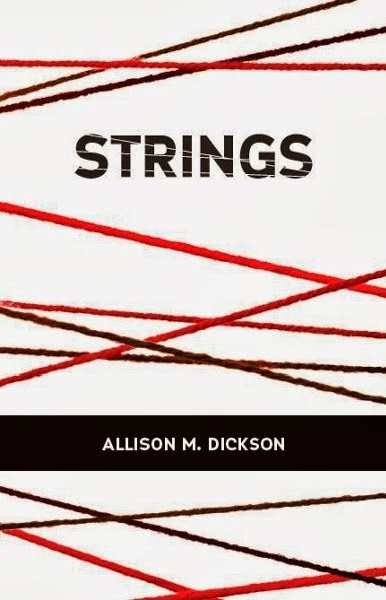 My guest today Allison M Dickson is one of those authors who have been creating since they could first hold a crayon. The fact that she was reading Stephen King by the age of 11 might be one of the reasons some of her writing is a little on the dark side.

After early success with short stories including “Dust” and “Under the Scotch Broom” she has now produced her debut book a dark contemporary fiction novel titled “STRINGS” .

After four years of turning tricks in a mob-run New York brothel to pay off a debt, Nina is ready to go back to a quiet life in Iowa. Just one more client and the whole nightmare will be behind her, but this last trick turns into a battle for her soul. Meanwhile, the brothel’s sadistic Madam has been hiding away money in order to move up in her family’s organization, and she only wants the half million dollars the reclusive millionaire pays for the girls. But her driver Ramón has other ideas, making off with the money left behind when Nina’s last trick goes unexpectedly awry.

The theft comes at a great cost to the Madam, setting off a horrific chain of events that changes them all. The hooker. The driver. The Madam. All of them on a collision course to a place where only madness holds sway.

With Hobbes End releasing Allison’s dystopian science fiction novel, THE LAST SUPPER later this year I am sure we will hear plenty more of Allison M Dickson.

So listen now and share an interesting, and entertaining show as I chat with my special guest today on A Book and a Chat with Allison M Dickson

You can find out more about my guest and their books at:
"Allison M Dickson - Strings"