A Book and a Chat with Gail Z. Martin 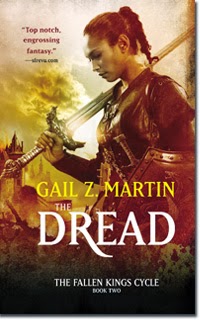 My guest on today’s show is Gail Z. Martin she is the author of three fantastic fantasy series, the Ascendant Kingdoms Saga series, the Chronicles of the Necromancer series, and the Fallen Kings Cycle series.

Writing since she could hold a crayon, Gail’s first story was about a vampire, during middle school with a mix of Star Trek syndicated re-runs (the original 1966 series) and A. E. van Vogt’s Destination: Universe! Gail discovered science fiction.

From the huge success of the Chronicles of the Necromancer series, Gail continued to weave a magical spell with her “Fallen Kings Cycle of which her latest novel “The Dread” is the second of the new series.

Summoner - King Tris Drayke takes what remains of the Margolan army north to fight a war. But he's heading for a fight they are ill-prepared to win, and spies confirm Tris's worst fear. A dark summoner is gathering his forces and plans to exploit the Winter Kingdoms' weakness.

And in Isencroft, King Donelan is assassinated. Tris's queen, Kiara, must return and claim her father's crown - but the summoner's agents will do anyting to stop her. Kiara and Tris must discover his secrets, find the mysterious power surrounding their infant son, and face the awesome power of the Dread as they rise from their barrows for the first time in over a millennium. And if the summoner claims the Dread for his own, only old magic can hold back the nightmare.

There are two further books planned to be released this year. Reign of Ash (book 2 of the Ascendant Kingdoms saga) will be released by Orbit in April 2014 and the first in an urban fantasy series Deadly Curiosities which will be released by Solaris in July 2014, something completely different from her high fantasy novels.

So listen now and share an interesting, and entertaining show as I chat with my special guest today on A Book and a Chat with Gail Z. Martin

Direct link to the show
A Book and a Chat with Gail Z. Martin

or you can download the mp3 file of the show from
"Gail Z. Martin"

You can find out more about my guest and their books at:
"Gail Z. Martin - Dread (The Fallen King Cycle)"